Pigmon's name is a shortened combination of "Pygmy Monster".

While most creatures within the expedition to the Lawless Monster Zone were vicious, Pigmon was not. The diminutive beast helped the injured sole survivor by giving him food, and led the SSSP to him when they arrived on the island. When Red King attacked, Pigmon distracted the dinosaurian creature while the Science Patrol escaped, but Red King killed Pigmon by causing a landslide with a huge rock, crushing him to death. The Lawless Monster Zone

Later, Pigmon (along with Telesdon and Dorako) were resurrected by Geronimon as a warning to humanity. Pigmon warned the Science Patrol of Geronimon's plot to attack Earth with an army of 60 monsters under his control. The Science Patrol were able to destroy Telesdon without much effort, but after one of the members, Ide (Ito in the American version) is nearly killed by Revived (Re-) Dorako, Pigmon distracts the monster and is crushed to death by it. The Little Hero

Pigmon's episode appearance and role were both very similar to the one of his debut in the original Ultraman TV show. Once again he befriends humans that are stranded in a valley infested by monsters (appropriately starring the monsters Red King and Chandlar,) as well as WINR. The only change was that he was allowed to survive at the end of the episode.

Pigmon reappeared in episodes 5, 6, and 36 of the series, Ultraman Max.

In this series, a Pigmon is sent by its species from another planet to live on a mysterious island ("Subject Phantom" according to DASH). The Island sealed away Red King underground a long time ago and sent Pigmon, as well as two monsters named Salamadon and Paragler to act as guardians to both the island and to keep Red King from awakening. Pigmon quickly befriends Kaito, the host of Ultraman Max until both Kaito and Pigmon were knocked unconscious and a tomb securing Red King is desecrated. Red King awakens and attacks, killing the two guardian monsters, then turns to Pigmon in hopes of killing it too. Kaito transforms into Ultraman Max and after a lengthy battle, in the end destroying Red King. Pigmon then bids farewell to Kaito and Team DASH before turning into a stone statue to make the island disappear and not cause any further problems.

The same Pigmon later returns towards the end of the series, where it warns Team DASH that Red King has returned "mysteriously" (in fact, it was an Alien Shamer that opened a dimensional portal by accident that released both Pigmon and Red King). Once Pigmon tries to fight the disguised Alien Shamer, Shamer hits Pigmon with a dimensional ray gun, but its atoms are mixed into Elly (an android member of Team DASH) and became amorous towards Kaito. In the end however, Pigmon sacrifices itself by throwing itself into Shamer's dimensional weapon, separating his atoms from Elly's body and into another dimension while Red King is destroyed once again by Ultraman Max.

Although Pigmon is never seen again after its last appearance, it is implied that some of Pigmon's personality is still left behind in Elly's body at the end of episode 36.

In this film, a Pigmon living on an unidentified desert planet has befriended a temporarily banished Ultraman Zero, who is training with Ultraman Leo. It is also because of Pigmon's role in the film that Ultraman Zero learns about what it means to be an Ultraman, and thus leaves with that knowledge to face off against Ultraman Belial.

In episode 7, him along with Ultraman Taro and many other monsters are seen cheering Ultraman Ginga on as he fights Dark Galberos.

In this series, Pigmons are a race of monsters that awakened after the Ultra Flare incident. Most of them can be seen in Sydney, Australia, the Chang Jiang River, and Luxembourg. Pigmons are usually friendly and easily feel lonely when no one is around, even if it is another member of their own race.

One peculiar Pigmon lives somewhere near the Tatara City and had played with several children in the neighbourhood for 15 years, collecting several of their memento in its tree shelter. However, certain people mistook it as a red ghost that had been sighted in the neighbourhood area. Sakura, a newly moved little girl finds Pigmon and played with it. While Sakura and her mother left for the shopping complex, Pigmon sees the Dark Thunder Energy and chases Sakura's car all the way to the Tatara City to warn her but accidentally made the citizens mistaken it for a threat until Xio officers arrived and the Dark Thunder Energy strikes, bringing forth King Guesra.

Pigmon saves a man that hit him earlier from several falling rubble at the cost of its own safety and seemingly died when succumbing to its injury. However, Xio was able to nurse Pigmon back to health and return it to its original home as its playing with Sakura. My Friend's a Monster

Pigmon reappeared as a Cyber Card In the final episode of Ultraman X. After Ultraman X spoke out to Gomora and striked Greeza right in the center of his chest, Pigmon, along with all of the other Cyber Cards, traveled to X and united with him. Cyber Pigmon's power was used to help form the Hybrid Armor and power up the Ultimate Xanadium to defeat Greeza once and for all. Pigmon, along with the numerous other Cyber Cards and Spark Dolls, then appeared and thanked Daichi as he thanked them. The Rainbow Land

A Pigmon was the assistant of a Dada, who was tasked with setting up a thank-you party for aliens to come together and have a good time. However, Pigmon got the date wrong, so the guests would only arrive one day later, even though he and Dada already finished setting up. Dada then got Pigmon to look for people to lure to their house as substitute guests, and it met Asahi Minato and her friends, who followed Pigmon. Pigmon and Dada then start the party, with Saki Mitsurugi coming later. When Dada started rampaging upon hearing that Katsumi Minato and Isami Minato were actually Ultramen, Pigmon went off to look for Booska. After the battle, Booska shrank Dada down into a capsule, which Pigmon played with while in what seemed to be Dada spaceship.

Pigmon were under attack by Mecha Gomora on Planet Hostar 21 and were nearly brought to extinction. Ultraman Tregear used this opportunity to provoke Katsumi Minato to transform into Ultraman Rosso and save the Pigmon, but he was later defeated by Snake Darkness. Stranded there and dehydrated, Katsumi was beginning to lose hope but the Pigmon he saved gave him some water. Katsumi later said goodbye to the Pigmon as his family helped him return to Earth. Ultraman R/B The Movie: Select! The Crystal of Bond

Pigmon appeared on a planet, where it happily greeted Space Sevenger, only to be targeted by two Garamons, causing Sevenger to defend the small monster.

He appeared in the game, Ultraman Ball.

Pigmon reappeared in the puzzle role-playing game for mobile devices, Ultraman Galaxy as a C (Common) card that you can unlock him in one of the levels in the game with a very high chance of getting Pigmon.

Pigmon appears in this game.

While not directly appearing, a small alien by the name of Pigmon does appear in the manga.

Pigmon appears in the Japanese variety show, Takeshi's Castle. He participates in "Knock Knock" and "Rice Bowl Down Hill" in which he both fails in. In the U.S version known as MXC, he is called "Inoperable Tumera".

Part of the Ultra Monster Series 2005 Toyline, Pigmon is a new mold based on it's appearance in Ultraman Max, sporting 4 points of articulation.

The toy was later reissued in Asia, under the Ultra Monster Series moniker, with no ID number attached in it. 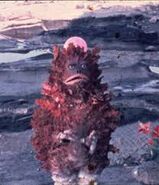 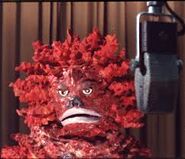 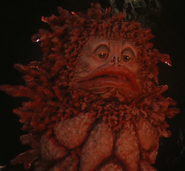 Powered Pigmon behind the scenes 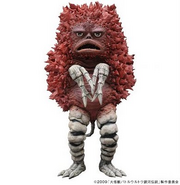 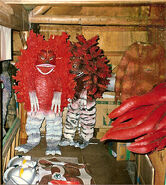 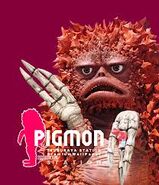 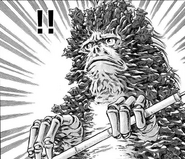 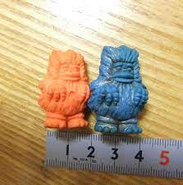 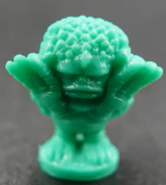