Ultraseven episode 35 "Horror on the Moon"

None
Petero (ペテロ, Petero) was a monster that appeared in the TV series Ultraseven. He appeared in episode 35. A strange rock-like monster composed of 80% water, Petero was the servant of the Zamppa aliens and put up a hard fight against Seven until, by chance, a crashing meteorite gave Seven the light energy he needed to overpower and defeat his adversary.

Petero's name was inspired by Saint Peter, one of the Twelve Apostles of Jesus Christ, leaders of the early Christian Church.

After Alien Zamppa failed to kill TDF member Kurata and Kiriyama, he sent Petero to do the job after his death. The monster tried to destroy their ships but forunately Dan transformed into Ultraseven and fight him. Petero was able to overpower Ultraseven thanks to the low temperature of the moon and the Ultra was cut from the sun until a meteorite crashed, emitting an explosion which Ultraseven used it to charge himself and finally kill the monster with the Wide Shot. Horror on the Moon 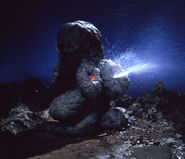 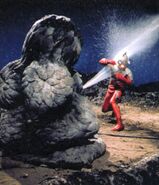 Figure of Petero, by Marmit. 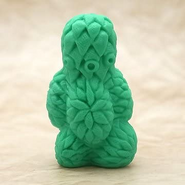