Pestar[2] (ペスター Pesutā) is a Kaiju that fed upon oil and attacked several oil rigs to quench itself. After it was lured onto land, he was knocked out by the SSSP. Later, he was destroyed by Ultraman, who proceeded to undo the damage Pestar had done.

Pestar's name is a combination of Petroleum and Starfish.

Pestar was an aquatic monster that had been preying on oil tankers that wandered too close to his territory for a while. He was first spotted by a drunk man, who tried to alert the authorities, but was dismissed for being intoxicated. Once the Science Patrol heard about the monster and noticed the connection to the disappearance of oil tankers, they were called into action to deal with the monster. They first attempted to lure the monster out of hiding with oil barrels from a nearby oil refinery, but it took a long time to lure the monster out of hiding as it was suspicious of the Science Patrol's actions, and fed once the VTOL vehicles were running out of fuel.

Suddenly, a missile was fired by mistake at the monster while it was feeding. Provoked and angry, Pestar headed for the oil refinery and set it ablaze with his flames. Reacting quickly, the monster, due to smoke inhalation, was knocked unconscious. With the flames now out of control at the refinery, the Science Patrol was forced to leave Pestar to deal with the inferno. Luckily, Hayata transformed into Ultraman and managed to put out the fire with ease. Pestar however, was not finished and feebly fired behind Ultraman's back with his flames. However, this proved futile and Ultraman retaliated with the Spacium Beam, killing Pestar easily, and leaving Ultraman to finish extinguishing the fire.

Much like the original kaiju, Pestar was an aquatic monster that had been feeding on oil tankers that passed by his territory. WINR at first tried to pursue and stop Pestar using a submarine known as the "Barracuda" but Pestar's size caught them off guard. After a brief tussle, Pestar escaped. The next night, Pestar reappeared and attacked an oil refinery to feed on its oil, but Ultraman Powered appears in time and destroys Pestar by tossing him into the air and firing his Mega Spacium Beam at the kaiju.

Pestar reappeared as a Cyber Card in the final episode of Ultraman X. After Ultraman X spoke out to Gomora and striked Greeza right in the center of his chest, Pestar, along with all of the other Cyber Cards, traveled to X and united with him. Cyber Pestar's power was used to help form the Hybrid Armor and power up the Ultimate Xanadium to defeat Greeza once and for all. Pestar, along with the numerous other Cyber Cards and Spark Dolls, then appeared and thanked Daichi as he thanked them. The Rainbow Land

Pestar was one of the three monsters (alongside Takkong and Gamakugira) that was awakened in the water Planet Nuock after its inhabitants started fighting against each others. Gai transforms into Ultraman Orb and defeated all three monsters.

A robot similar to King Joegue, Gyeronia, and Bemzn based on Pestar known as Pestria (ペストリア Pesutoria) was summoned by Gua general Imbiza to destroy both Taiga and Andro Ares. Unfortunately, it was destroyed by the two after a short battle.

Pestar appeared on Suflan Island when Sevenger was active on it defending a research facility. After a battle ensued, with Pestar drinking the oil from Sevenger directly, Gandar appeared too. The three engaged in a free-for-all fight, but soon the two kaiju teamed up on the robot. The beasts fired their respective flame and ice attacks simultaneously, but the strategy backfired, as the two hit each other with the attacks, killing each other due to their weaknesses to the other's abilities.

A Pestar infected by a Devil Splinter appeared on Planet Liquitor, where it was engaged by Ultraman Fuma. After a short battle, the Ultra used his Polar-Star Light Wave Shuriken attack and sliced the beast down the middle, collecting the Splinter it had left. Ultra Galaxy Fight: The Destined Crossroad

Two Pestars and a Powered Pestar were released by Bandai for the 4 inches Ultra Monster Series. The figure has one point of articulation in the head and is detailed. The Powered Pestar was released in 1994 and is also very detailed. He stands at 8 inches tall and its width is 14 inches long but doesn't have any articulation. 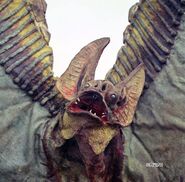 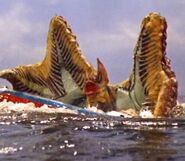 Pestar attacking a boat with oil 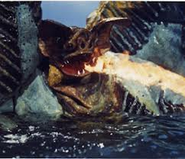 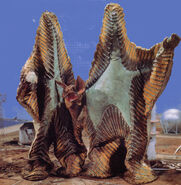 Pestar gets sliced in half 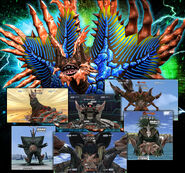 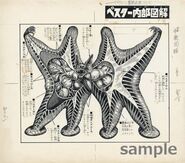 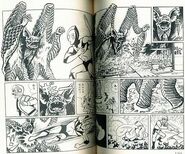 Pestar in a stage show

Argentina comic 'Ultraman' in magazine Billiken in 1969. On the way from the scene on the left to the scene on the right, "the scene where Ultraman is being enveloped into a lump of oil by Pestar in the sea" is omitted, so the connection is difficult to understand.

Round 1: Hayata's Beetle, which was on the alert of the tanker, was shot down by a water column attack from underwater. Hayata transformed into Ultraman undersea. Then, a mysterious black cloud-like object approached Ultraman.

Ultraman went out to surface trying to escape the vortex. He chopped the black clouds that covered his lower body and dove into the sea again. The tanker sailors were surprised to see this and wondered what Ultraman was fighting. In fact, actually, even Ultraman didn't know the identity of his enemy yet.

When Ultraman dove into the sea again, several mysterious lumps of liquid rapidly approached him like torpedoes. Due to the resistance of water, Ultraman could not avoid them, hitting Ultraman's body one after another, binding to each other and completely wrapping Ultraman. Captured by a sticky liquid and deprived of his freedom, Ultraman floated to the surface.

The tanker sailors were surprised to see Ultraman floating in the sea surrounded by a mysterious liquid. Ultraman noticed that the liquids were lumps of oil and frustratedly removed them off by Ultra Spin. Ultraman returned into the sea again, but the mysterious black cloud disappeared deep into the sea.

Round 2: Ultraman kicked Pestar and then chopped it, but was exposed to Pestar's flames from a close distance, and his whole body had been covered with flames.

Ultraman flew to the air with his body still burning, then dove into the sea and extinguished the fire. And he soared again and slammed Pestar.

Ultraman tried to strangle Pestar, but on the contrary, he found himself strongly tightened by Pestar. Ultraman was immobilized, and his Color Timer began to blink. Pester's tightening power was so strong that he had split the tanker in half before.

Ultraman noticed that there was an oil tank. Then, with his body tightened by Pestar, he jumped into the oil tank from his head together with Pestar and both were dipped with heavy oil.

Ultraman used the lubricity of the oil to free himself from the shackles of Pestar and fired a Spacium Beam from the sky onto Pestar. Pestar exploded, thus Ultraman finally defeated the Oil Monster.