Good
The Ultra People (ウルトラ人 Urutora Jin) are the natives of Planet U40 in the Planet Ultra U40 World. They are a race of Ultras with their planet serving as that universe's equivalent to the Land of Light.

The people hailing from the planet U40 were originally a race of beings almost identical in appearance to the people of Earth. These ancestors would plant colonies on different planets, the colonists without technology or weapons, forming new civilizations either on their own or by interbreeding with the native humanoid civilizations, in this way did they become the progenitors of many, possibly all, other humanoid species that came after them. This includes humanity, through the interbreeding of the native neanderthals and the Ultra colonists.

It is also around this time that the People of U40 created the Ultra Mind, an object which brought about a spiritual evolution in their people turning them into more powerful beings. With this power they eventually discovered how to perform the 'Ultra Change' and transform themselves into their Ultra Forms.

During this early era they came across the Bader Tribe, a reptilian species, that was belligerent and invasive, rejecting all attempts at communication and diplomacy. They attacked the Ultras and their colonies where ever they found them, bringing the two sides to inevitable war. The Bader were defeated thanks to the Ultra Mind. To keep it out of the hands of their ancient enemies they sealed the Ultra Mind in a black hole.

Later on the people of U40 had a split. Following the ideology of an individual named Heller several of their people were of the mind to use the powers given to them by the Ultra Mind as means to invade and conquer other planets. They were ultimately banished, stripped of their Ultra Powers but their link to the Ultra Mind remained meaning their long lives remained. In time they formed their own civilization under Heller, an invasive people who sought revenge against those that banished them.

Differences from the Residents of the Land of Light

The first major difference between the Ultra People and the Residents of the Land of Light is that, among the U40 Ultras, only eight are known to change their size. Their regular size appears to be that of a normal human being but, Amia is later seen at giant size in the series, having learned to grow to around half of her brother's regular size.

Another difference is that while the Ultras of M78 spend their time in Ultra forms, the People of U40 live as humans and are implied to be born as such. Also, while many do use the Beam Flasher to transform, many times natives have been showing simple switching between human and Ultra form a way similar to their teleportation.

While the people of Planet Ultra live in cities made of crystal towers, the U40 natives appear to dwell in lush green environments and live in buildings reminiscent of ancient Greece while wearing garments such as togas and sandals. However, behind this primitive facade, they possess advanced technology and in truth dwell in massive cities buried deep beneath the surface. Another difference is that the technology is used to build starships for them as they cannot perform faster than light travel without a Star Medal.

While the people of the Land of Light became Ultras by the power of the Plasma Spark, the people of U40 use what is called the Ultra Mind to transform.

Another difference is that their Color Timers are removable and non-implanted through surgery. The U40's models are pendants called as Star Symbols (スターシンボル Sutā Shinboru), which provides their users with the ability to travel to other planets without the need of their star ships. They are literally acquired as pendants worn in human form before transforming into Ultras.

Also, unlike their M78 counterparts who are born as giants, the U40 Ultras are born in human form, must learn to become giants. Their titanic sizes are on average, 60-70 meters, but can grow to 120 meters should they absorb enough sunlight. However, only eight of these existed to be worn by chosen warriors.

One of the Great 8, the eight strongest Ultra Warriors who can become giants. Joneus was the strongest of their group. By order of the Great Sage, he was sent to Earth. Needing an Earth identity, he merged with Choichiro Hikari. After all the battles the two had together, Joneus eventually separated from Hikari and returned home to U40.

The younger sister of Ultraman Joneus. Unlike her brother, she originally could not transform. When Joneus fell on Earth during the conflict with the Heller Fleet, he was brought to U40 to be revived. There she met Choichiro, her brother's host, and restored his memories. During the battle with the Heller fleet, she was with the Great Sage, who was captured. Sneaking into Heller's base, she too was captured and forced to watch as he was digitized into a card and her brother and friends were going to be fed to a monster. Fortunately, her brother escaped and killed Heller. While the base was coming down, she revived the Great Sage and escaped. She later visited Choichiro on Earth hoping he would return to U40, but both he and her brother knew that duty would not allow that. Later, she returns to Earth, and for a time, uses a school girl of the same name as her host, having gained the ability to change size.

The other Five Warriors (5人の戦士 Gonin no Senshi) besides Joneus, Loto and Elek that make up the Great Eight warriors of U40. Like the other three named Ultras, these nameless warriors are able to grow to giant statures. Of the eight warriors, Joneus was said to be the strongest of their numbers. Unlike normal residents of U40, they are granted the Star Symbols on their Color Timers as badges of courage. They were first seen participating in the campaign against Badel Tribe to defend their home world and later on joined Joneus destroy Baladon's saucer in episode 27. The known names are Noa (ノア, Noa), Miguel (ミゲル Migeru), and Melg (メレグ Merugu). By themselves, they can fire the Ultra Warrior Hand Beam (ウルトラ戦士ハンドビーム Urutora Senshi Hando Bīmu).

The natives of Planet U40, these humanoid beings are one of several that inhabit the Planet Ultra U40 World. Unlike the people of the Land of Light, their true forms are their human forms. They take on Ultra form by binding with an energy called the Ultra Mind. All citizens of U40 transform using Beam Flashers or at least similar objects. Among the people, there is also a ruling council that serves as the government.

The Great Sage (大賢者 Dai Kenja) is the spiritual leader of the people of U40 who watches over the people of U40. During the conflict with Heller, he was captured and Amia and Choichiro were forced to watch as he was digitized into a data card. After Heller's defeat, he was restored and teleported away by Amia. In the English dub, the Great Sage was the physical form of the Ultra Mind (A power and existence that was basically God).

People of U40 banished for wishing to use the Ultra Mind's power for conquest, they have lost the ability to transform but instead gained eternal youth from their Ultra energies. Under the command of Heller, they created the Heller fleet and seek to conquer the universe.

The leader of the Heller fleet, Heller was an Ultra who proposed to use the powers of the Ultra Mind to conquer the universe, content in his belief in their superiority. This idea was outright rejected by the ruling body of U40 and Heller was banished along with other like minded individuals. Stripped of their Beam Flashers and direct link to the Ultra Mind, what powers they maintained were used to make themselves biologically immortal and they proceeded to create a fleet of robots, starships and monsters using their advance Ultra Science. They later attempted to attack U40 but were easily repulsed, and instead turned his attentions to Earth as part of a ploy to defeat the Ultras, knowing they monitored the planet and its inhabitants. Heller's second in command, Roygar, was put in charge of the Earth invasion, and when he was later killed, the conflict escalated into an all out war between him and the people of U40. Somehow, he captured the Great Sage, and later, the Science Guard Party on his base planet. He digitized the Sage into a data card to learn his secrets of the Ultra Mind and attempted to have the team executed, knowing one of them was host to Joneus. However, Joneus was summoned and assisted by Elek and Loto, who brought his then flying base crashing down. Joneus himself punched Heller at giant size, sending to him to fall to his death while the rest of the Heller fleet was defeated.

Heller's second in command, he was put in charge of the invasion of Earth. His flagship was stationed behind Jupiter but he was eventually killed by the combined effort of the Science Guard Party and Ultraman Joneus.

While robots in the American adaptation, they are actually natives of U40 who separated and went with Heller on his attempt at universal conquest in the original series. Like Heller, they have also lost the ability to transform but still maintained a level of connection to the Ultra Mind that once allowed them to transform. They wear battle armor very different from their previous Ultra forms. 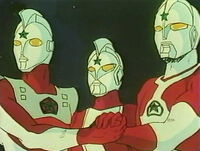 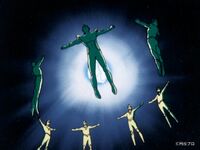 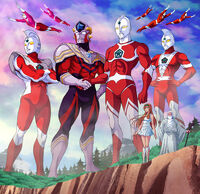