Itself (which by technicality includes its hosts)

Upon its initial arrival to Earth, the alien organism found that it was incompatible with Earth's atmosphere, impeding on its plans of conquest. It discarded it body and somehow obtained a device that would serve as a base for its new body. It set up its base in the basement a medical company and used a new product called Shiner 05 as a means to infect more people and spread until it was ready to recombine. In divided itself into the medicine making it undetectable to human tests, once ingested its presence increased human intellect even before it took over the host's mind. However, though most humans could be assimilated, some were incompatible, so Peginera killed them by draining them of nutrients before it vacated, leaving mummified husks.

DEUS began to catch on and sent Jin, Agent K, and Agent S to investigate, with S using her skill in undercover tactics to infiltrate the company. Eventually she noted to the heads of the company were infected and that they were hiding something in the basement. The began on operation to raid the building but S went in ahead, getting caught and causing the security system to lock them in. All three found themselves in the basement were the alien's body was waiting, they were captured and the alien explained it plot content in believing it had won. S made and opening and K fired upon the large block that was the base, in response, all the peginera left their hosts and converged on the block to form their new form. The three agents left the building but Jin went of on his own and transformed into Ultraseven X.

The two aliens battle with Peginera trying to infect the Ultra to no avail, it was ended by a combination of the Eye Slugger and Emerium Ray. After which DEUS rounded up and disposed of all the Shiner 05 the could find, however at least one sample was overlooked, leaving the possibility it could return. 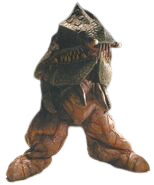 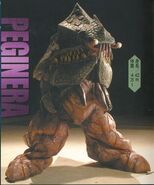