Megumi Han (voice)
Pega (ペガ, Pega) is an Alien Pegassa and one of the supporting characters of Ultraman Geed. An alien boy who sought refuge in Riku Asakura, he becomes one of the youth's supporter. While usually staying indoors, Pega would use the Dark Zone to enter Riku's shadow when walking outdoors.

At some point at an unknown time, Pega was left homeless and met Riku in his middle school years, who was able to hear his cry whereas other humans could not. Riku secretly sheltered the alien in his house and had accidentally serving as the "third wheel" to Moa Aizaki's "date" with the boy. As Riku grew up and started his job at Haruo's Galaxy Market, Pega helps him to stay afloat by having an internal business of creating artificial flowers.

As a result of Skull Gomora's attack on Ginga Market and the Nebula House, the two were left homeless with neither of Riku's friends were able to help him. It was then where the two met RE.M., who provided them the access to an underground base and revealed Riku's true heritage as an Ultraman. Although originally timid, Pega was more supportive to Riku's decision as an Ultraman, later on accepting Laiha Toba into their base as they christen it the new Nebula House. After learning of AIB's existence, Pega would properly introduce himself to Moa, Riku's own childhood friend as she quickly warms up to him after seeing how he would keep both Riku and Laiha's relationship in control.

Pega follows Riku and the gang around as they uncover the secret of the Red Steel, the legendary item that is said to be the only thing that can destroy Gillvalis. Ultraman Geed The Movie: Connect the Wishes!

Riku and Pega were abducted by Ultraman Tregear and sent to Ultraman R/B's universe. The two friends were separated as Pega was placed inside a Gan-Q, who was sent with Bemstar to attack Ayaka city. While fighting the Kaiju duo, Riku heard his voice within Gan-Q, calling for help. Ultramen Rosso and Blu came up with a plan to rescue Pega after learning that Gan-Q's eye and Bemstar's gorge were linked. Blu fired the Storm Shooting at Bemstar, and Rosso launched a Splash Bomb that entered the gorge, encased Pega, and exited from Gan-Q's eye. With Pega now safe, the Ultras finished off their opponents.

Pega and Riku had dinner at the Minato family house, where Pega showed his Dark Zone to the family, wich would later be used by Mio to send a message throughout space in an effort to contact Katsumi, who was trapped on Planet Hoster 21. The plan works, and they manage to bring him back to Ayaka City to face Tregear and Snake Darkness.

Some time after Snake Darkness is defeated, Riku and Pega go back home with some gifts. Ultraman R/B The Movie: Select! The Crystal of Bond

When Gillvalis revived due to a Devil Splinter and attacked Planet Ain (惑星アイン Wakusei Ain), Geed went to deal with the robot but was knocked down before he could change into Ultimate Final, with the Riser being broken in the process. Pega appears and hands Riku the Z Riser and Ultra Medals he received from Ultraman Hikari, allowing Riku to transform into Ultraman Geed Galaxy Rising and pursue Gillvalis to Earth. The Man Returns!

Sometimes later, Pega tracked Riku to Haruki's Earth. The two friends reunite and leave the Earth to Haruki and Z to hunt down the Devil Splinters in space. His Majesty's Medal

Pega appears as one of the main navigators of the series, alongside Booska.

Pega showed up at Marluru's house and first was met by Deban. While Marluru practices making a film introduction, they find Deban and Pega having a conversation. Marluru interrupted them and became annoyed, but Deban explained Pega's status as Ultraman Geed's partner who once saved the universe, which resulted in Marluru becoming interested.

"Something about him scares me! I'm just gonna go home!"

Ultraman R／B The Movie: Select! The Crystal of Bond 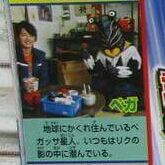