Pedoleon (ペドレオン Pedoreon) are the space beasts in Ultraman Nexus TV series. They appeared in episodes 1-4, 12, and 37. They are known for their appetite for gasoline, ethanol and oil, as well as living organisms including humans.

The Pedoleons are tributes to Goga from Ultra Q.

The different variations of Pedoleon have Japanese names based on German words that relate to their current state:

All Pedoleons' motifs are based on slugs, amoebas, and sea anemones. Their body structures and shape are based on Anomalocaris, and like jellyfish, their body is 95% water.

One night at a gas station, a truck pulled up to get some gas, but a strange liquid from underneath the truck began to reform and would cause problems. The liquid turned into Pedoleon Kureain (ペドレオンクライン Petoleion Kurain), the first of many Space Beasts to come to Earth, and was close to eating a gas station worker had a shot not been fired, forcing it to flee. The assailants of Pedoleon Klein were none other than the elite task force created by TLT, Night Raiders, who soon tracked the bizarre organism into a tunnel and blasted it to pieces. However, it wasn't the only member of its species to come to Earth. Another Pedoleon Klein later appeared mysteriously as it attacked a bus full of people. Kazuki Komon, an unknowing transfer member of Night Raiders, found the bus and was soon found by Pedoleon Kureain. Before the Kaiju could devour him, a fire ball from the sky destroyed the organism and the fire ball revealed itself to be a silver giant. This would be the first of many appearances of Ultraman Nexus and faded away just as Night Raiders showed up. Night Assault - Night Raid -

Two more appeared in a forest weeks later and managed to eat two unfortunate teenage men. As one was about to eat a young woman, Night Raiders arrived and killed both of the Space Beasts. After Pedoleon Kureain lost four member of its species, remnants of them fused into Pedoleon Guros (ペドレオングロース Petoleion Korus) appeared in a factory and already devoured a worker as it chased after two others. Strange Creature - Space Beast -

Night Raiders were sent in and after one of Pedoleon Guros lost a tentacle, it spawned two more and grabbed the two men it was chasing as hostages. Night Raiders was ordered to shoot the Space Beast, but before anything was done it began to walk away. Just then, a man in black turned into Ultraman Nexus and used the Savage Belt to free Pedoleon Guros's two hostages and placed them down gently. Before the battle could start, Night Raiders member, Nagi began to open fire on Nexus. It wasn't enough to stop Nexus as he began to assault the Space beast until it began to emit gas from its back that was highly flammable and turned into Pedoleon Furigen. After Pedoleon Furigen turned into Pedoleon Furigen (ペドレオンフリーゲン Petoleion Furiken), Ultraman Nexus and Night Raiders went after the space beast by air. Nexus quickly switched from Anphans mode to Junis, and trapped Pedoleon Fliegen in the Meta Field and destroyed him. Giant - Ultraman -

Another Pedoleon Guros would later appear, having devoured some cars with passengers on it. With Night Raider were sent into mission, the monster fired an energy blast, revealed to have learned the tactic from the Night Raider assaults. Transforming into Fliegen, the aerial war raged on until Nexus arrived and battled the beast. He summoned the Meta Field and finally terminated the beast inside the pocket dimension. Subspace - Meta Field -

When Komon was infected with partial of a Beast Cell, he began to receive hallucinations of a group of Pedoleon. Klein trying to attack him as it actually tried to feed on Komon's anger until Himeya appeared and exorcise the entity. Separation - Lost Soul -

Despite Zagi's defeat and destruction at the hands of Noa, remnants of the army of Space Beasts would appear on Earth, terrorizing the planet. Near the end of the final episode, a swarm of Pedoleon Furigen rampaged with the Night Raiders attacked them in front of public, with their operation is no longer being a secret. Bond - Nexus -

With Zagi's demise, remnants of his Space Beasts army were still at large. Near the end of the final episode of Ultraman Nexus, a swarm of smaller and silver version of Pedoleon Furigen attacked a city, only to be wiped again with Night Raiders, now with the members expanded.

Pedoleon appears in its Guros form as the first enemy on Nexus Mode, later appearing again in the final story alongside Dark Zagi. Pedoleon is also a playable character. To obtain the space beast, the player has to defeat it on Nexus Mode. Ultraman Nexus (video game) 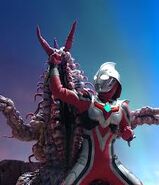 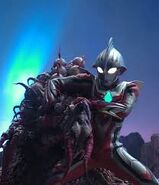 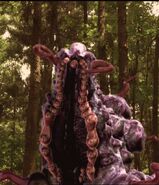