None, created by Dr. Psychi

Built sometime prior to the series, Partel is a companion who served as Psychi's sole friend.

As the series, passed, it portrayed multiple functions, some of which proven useful to her creator. After the Queen Bezelb fell from her injuries, Partel combined both her and its creator into Psyqueen before it split them for Orb to retrieve Psychi. She was last seen protecting Shinra and Ricca from an incoming rubble, ceasing functions as a result. 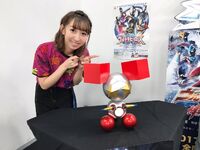