Ultraman Cosmos episode 21 "The Battle with the TECCH Booster: Part 1"

Some time ago, the planet that became Chaos Header's next target was Juran. As Chaos Header rampaged on the planet, Parastan, the protector of the planet, fought and defeated him. This was witnessed by the planet's ancient civilian, who wrote the story on a wall.

However, sometime later, Parastan’s body was taken over by the Chaos Header as the world drifted toward Earth. When EYES landed on Juran, they were quickly under attack by the powerful Chaos Parastan. Armed with numerous attacks and abilities, the sphinx-like nightmare was met by Ultraman Cosmos. Yet the monster proved more than a match for the Ultra. Using its lightning attack, Chaos Parastan beat Cosmos into submission before vanishing into a spore of Chaos Organisms.

Not long after the group found a survivor of a previous exploration of the planet, Chaos Parastan struck again. The creature was again met by fire under EYES and soon Ultraman Cosmos once more. This time, however, the guardian managed to rid the monster of the evil within it, turning it back to its normal, but unconscious, self. Seeing how effective this creature was against the intergalactic hero, the Chaos Header wasted no time in taking the form of Chaos Parastan S (カオスパラスタンS Kaosu Parasutan S). Ultraman Cosmos quickly went from Luna to Corona Mode and beat down Chaos Parastan S mercilessly. After destroying Chaos Parastan S's horns with the Corona Kick, Cosmos used the Naybuster Ray to destroy him for good.

After Planet Juran was invaded by a swarm of Scorpiss, Parastan made a stand to defend her home planet. Despite her bravery, she fell in battle, and her corpse was seen by Musashi as he flew overhead.

It can be assumed that Parastan was revived by Cosmos after repairing the planet, as the same thing also happened to the planet Gyashi. 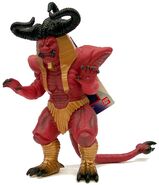 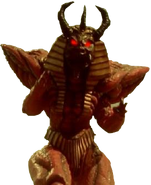