When a Japanese fishing vessel brought up a dinosaur corpse, the Aizenborg was called in to investigate. Little did they know Ururu was also investigating the same region of the ocean. Calling Parasa, Ururu sent the hadrosaur to an island. Guarded by massive saltwater crocodiles and the chirosaurus, the Aizenborg made its way to the island, where Parasa attacked them from a cave.

After the fishing vessel was attacked by both Chirosaurus and crocodiles, Parasa himself dove into the ocean to stop the progression of Aizenborg, and after being shot at repeatedly, both battlers disappeared under the waves, the Aizenborg surfacing first, then the two halves of Parasa, split down the middle. 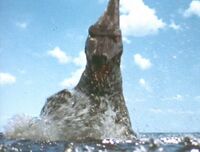 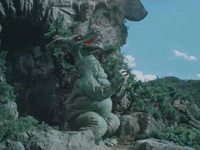 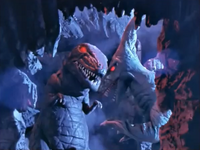 Parasa with his master Ururu 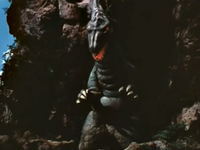 Add a photo to this gallery
Retrieved from "https://ultra.fandom.com/wiki/Parasa?oldid=512079"
Community content is available under CC-BY-SA unless otherwise noted.