Return of Ultraman episode 42 "The Monster That Stands on Mt. Fuji"

Paragon (パラゴン Paragon) was a Kaiju from episode 42 of Return of Ultraman.

Paragon was a monster that was used by its master, Alien Stora in his plan for invasion. While hiding on top of Mt. Fuji, Paragon used his mirage ability to cause several vehicle accidents, which was causing problems for everyone living nearby Mt. Fuji. Soon enough, MAT arrived in full force to deal with the behemoth as the nearby town was evacuating. Dwarfed by the enormous titan, MAT still tried to attack but its mirages caused them to crash into each other before a shot could be fired. Their remaining two fired but his hide merely reflected their lasers off.

The next day, Paragon lifted his illusion once more, appearing at the top of the volcano. MAT once more launched into battle with the enormous monster, but Paragon's mirages tricked their fighters into firing on their own allies on the ground, as well as the townspeople, all while Alien Stora laughed at their strife. Go finally changed into Ultraman Jack to battle the monster, but Paragon tricked the Ultra into appearing so enormous that the warrior of light barely stood to its ankle. Realizing that Paragon's enormous looks was due to his mirages (after flying through it,) Jack used the Ultra Bracelet to reflect its mirages back at it, causing Paragon to shrink down to its true size for Jack could battle. Now even in size, Jack managed to fight through Paragon's attacks and tore of the beast's horns and wings and ultimately sealing his victory but firing his Spacium Beam to destroy the ground below its hind legs, causing Paragon to topple over the edge of the volcano into the molten lava far below were it was burned to death.

Figure of Paragon by Marmit 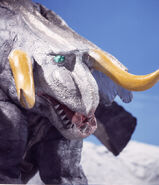 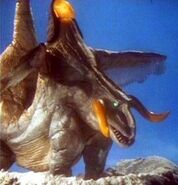 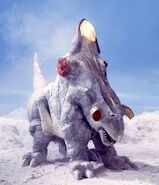 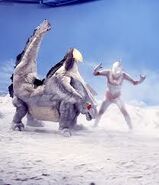