Paragler (パラグラー Paragurā), or Paragura, as he is also called is a kaiju that appeared in the TV series, Ultraman Max. He appeared in episodes 5 and 6.

Paragler was one of two monsters, along with Salamadon, who guarded Pigmon and the island's shrine. After the death of Salamadon at the hands of Red King, Paragler arrived on the field of battle after Ultraman Max temporarily stopped Red King. Paragler at first assumed Max was the threat and prepared to battle him, but thanks to the intervention of Pigmon, Paragler calmed down and left Max alone. Later Red King reappeared having recovered from his battle with Max, and confronted Paragler, who was a threat to him in killing Pigmon. Like his partner Salamadon, Paragler was no match for Red King's physical strength and was also killed by Red King's explosive rock barrage. 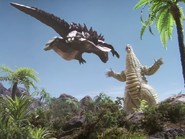 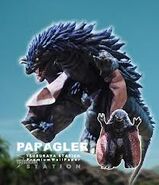 Add a photo to this gallery
Retrieved from "https://ultra.fandom.com/wiki/Paragler?oldid=467083"
Community content is available under CC-BY-SA unless otherwise noted.