Ultraman Taro episode 22 "The Wrath of a Child-Carrying Monster!"

None
Pandora (パンドラ, Pandora) is a kangaroo Kaiju that first appeared in Ultraman Taro.

A friend of Kotaro's and her newly-wed husband went to take a photo near the hill surrounded by rocks. Before taking a picture, they saw Pandora and ran away. The husband's hand slipped before he could save her; she fell and was knocked unconscious. Kotaro received a phone call from his friend about what happened to his wife. Meanwhile, Pandora is searching for plants to eat, but Pandora's child found the injured wife of kotaro's friend. The child of Pandora led the injured woman into their home in a cave. Chinpei (Pandora's child) then led the woman to a lake filled with yellow water.The yellow water provides medicine for Pandora and chinpei. Chinpei then proceeded to sprinkle the water on the woman's wounds. Meanwhile, Kotaro's friend is trying to hunt down the peaceful kaiju, but Kotaro does not let him. Kotaro's friend's gang then tied up Kotaro so he would not interrupt their work. However, Kotaro used his pocket knife to free himself and then searched for the group. Using a sniper rifle, Kotaro's friend killed Chinpei, making Pandora mad. Seeing the angry kaiju, Kotaro transformed into Ultraman Taro to save his friends. After a long battle, Ultraman Taro fired his ray at Pandora, leaving her severely injured, but after Kotaro's friend's wife made Taro realize that the Kaiju is peaceful, Taro used his healing ray to heal Pandora and resurrect Chinpei. After that, the two Kaiju return to their home. The Wrath of a Child-Carrying Monster! 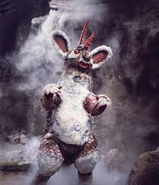 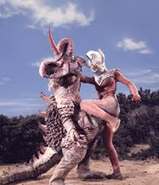 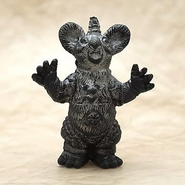 A Pandora eraser with a small sculpted Chinpe.