Oxter (オクスター Okusutā) was a Kaiju from the TV series Return of Ultraman, it first appeared in episode 30.

A gigantic ox kaiju, Oxter acted as a guardian of an underwater graveyard of prehistoric buffaloes. When archaeologists contaminated the grave-site with their hands, the guardian lashed out, killing people with its acid. MAT was called into action, firing away at the beast with firepower to no effect. Hideki Go called on Ultraman Jack and challenged the gigantic creature, and soon the fight moved to the underwater canyons of the lake.

Jack managed to escape and use the Ultra Bracelet to drain the lake water into the sky as vapor. As Oxter roared on, the hero unleashed his Spacium Beam, sending it to ground in a heap as streams of energy continued to fire from Ultraman's fingers. The energy vaporized Oxter's flesh, reducing it to a skeleton that was soon buried underwater by the returning lake water.

Soon after the battle though, Jack, touched by Oxter's determination to guard its deceased herd for eternity long after their extinction, moves Oxter's skeleton together with the rest of its herd to the deepest depths of the lake and drops the evaporated lake water back, sealing Oxter and the rest of its herd into its tomb where it may rest in peace in an eternal slumber, never to be disturbed by humanity ever again. The Curse of the Bone God Oxter

Oxter reappeared in the manga as part of an army of monsters labeled the "monster corps".

The beast appeared suddenly one day, attacking a group of children. Kotaro transformed into Ultraman Taro to do battle with Oxter. Before he could quite jump in, the monster cornered a small boy and prepared to kill him. The Ultra came quickly and fended it off, engaging it in close quarters. While definitely an oddity among giant monsters, Oxter moved forward, giving Taro a hard time. As things looked bad, another warrior of light then came into the fray, kicking Oxter and sending the beast sailing across the ground much to Taro's surprise. The Ultra was Ultra King and made sure not to give the ox guardian the chance to recover, using his Star Ray to eliminate the beast, destroying its body in a great finishing explosion. 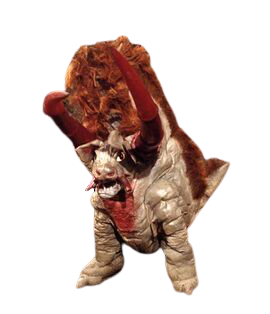 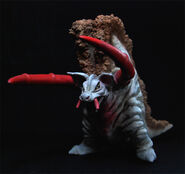 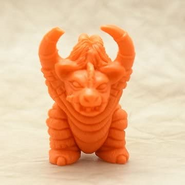 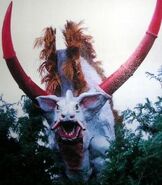 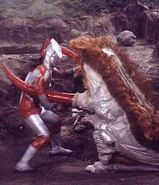 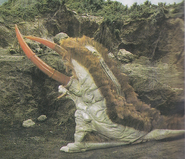 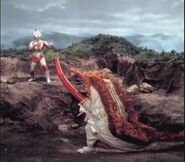 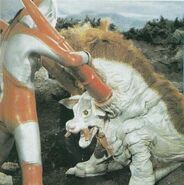