Same as a regular child

Same as a regular child

None
Otohime (乙姫 Oto Hime) is a human-like being from Ultra Q.

After Gameron brought Taro undersea, they entered the Ryūgū-jō. Upon arriving, Taro met a small girl that had reality warping powers named Otohime who used her powers to anger him. This caused a chase with the little boy flying after her. Taro used Gameron to follow her, thus Otohime created Kai Dragon out of a missile which she was riding to fire a few fireballs, knocking out the large turtle and sending the little boy to fall into the sea. Otohime managed to rescue Taro from drowning and fixed his burned clothes and gave him a box (Tamatebako) which would protect him as long as he didn't opened it before it got him back to reality. When Taro awoke, he told everyone about everything he experienced but they laughed, noting his story is similar to the legendary Urashima Taro. Forgetting the little girl's warning, Taro furiously opened the box, turning old but awakened for real as the whole thing was a dream. 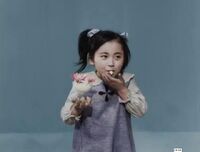 Otohime in technicolor
Community content is available under CC-BY-SA unless otherwise noted.