None
Orphy (オルフィ Orufi) is a friendly Kaiju in Ultraman Taro.

Orphy was a peaceful mountain dwelling Kaiju living in Yaijin Valley, who appears only once a year and was famous by the villagers living there thanks to it's lovely singing which the villagers use to predict the yearly harvests, which made Orphy and idol to them.

One day, the monster emerged from underground to sing again, but ran away after he inadvertently tore down a bridge. The next day, Orphy emerged again when he heard music played by a group of people who hope to anesthetize it. The monster stripped a tree bare to use as a conducting baton and then pulled out a sheet music of Largo from his belly button, and acted as a conductor to the band but the head honcho of that band, Sakamoto, made the music go faster, resulting in the monster dancing around to the beat until he sprained his legs when he got to the village by his own free will. Saddened, he went back underground.

When he was busted by ZAT, Sakamoto revealed himself to be Alien Khan in disguise and attacked the team and the surrounding area, causing rockslides and awakening the monster once again. The alien used his powers to aggravate the monster on purpose and destroy the area around him and he soon implanted himself inside the gentle giant's navel. The pain drove the monster mad and after ZAT's efforts were proven ineffective, it was up to Ultraman Taro to sooth the beast. Both giants engaged each other in close combat and were locked in a stalemate. After a short fight, Taro used a giant pair of tweezers to extract Khan out of the monster's bellybutton, and threw it away, destroying the cretin in the process. With the alien taken care of, Orphy finally calmed down, danced and sang to the Ultra in gratitude for saving him, and dug back underground, but not before saying his farewells to Kotaro and his team. 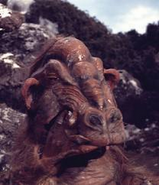 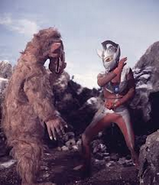 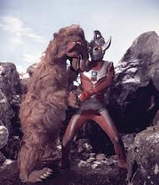 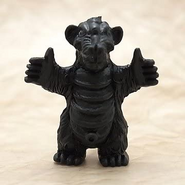 An Orphy eraser
Community content is available under CC-BY-SA unless otherwise noted.
Advertisement