In use, as Orb Trinity
The Orb Slasher (オーブスラッシャー Ōbu Surasshā) is a weapon used by Ultraman Orb Trinity, which utilizes the powers of Ultramen Ginga, Victory, X and Orb himself. It is stored on his shoulder when not in use. It is analogous to the Knight Timbre and Xlugger, both of which are weapons that took the form of Spark Dolls upon a state of deactivation. It has the same function from the Xlugger, however, the only difference is that the user has to slide the symbol panel from upwards.

In Ultraman Orb The Movie: Let Me Borrow the Power of Bonds!, after receiving the Ultra Fusion Cards from Ginga, X and Victory and scanning them with the Orb Ring, Gai summoned the Orb Slasher and transformed into Orb Trinity. As Orb, Gai summoned this weapon during the battle against Sadeath and Devorick. He has since then used it against other tough opponents such as Mecha Gomora and Reibatos.

Transformation
Add a photo to this gallery

Trinitium Giga Slash
Add a photo to this gallery 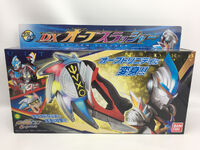 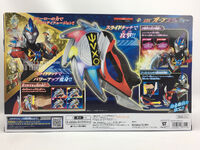 The Orb Slasher resting as spike decorations on Orb's right shoulder armor. Notice the lack of coloration on it.

Orb summoned the Orb Slasher from his shoulder

Retrieved from "https://ultra.fandom.com/wiki/Orb_Slasher?oldid=536769"
Community content is available under CC-BY-SA unless otherwise noted.