Ultraman R/B episode 8 "The World Is Waiting For Me"

Holly Kaneko (Orb Dark Mode)[1]
The Orb Ring NEO (オーブリング Ōbu Ringu Neo) is a device created by Makoto Aizen to transform into Ultraman Orb Dark. Ultraman Rosso and Ultraman Blu can also use the device for several finishers. It is based off of the Orb Ring used by Gai Kurenai and is transformed from the Orb Origin Crystal when inserted into a Gyro.

Aspiring to become an Ultraman like Orb, Makoto Aizen (Cereza) had researched the Orb Ring and had been recruiting several people who had traits similar to Gai Kurenai, and hooked them up to a special machine to restore the power of the Orb Origin Crystal. Once he had enough people, he used their "power of bonds" to energize the Orb Origin Crystal, summoning the Orb Ring NEO.

After his first defeat, Makoto loses the Orb Ring NEO to Katsumi and Isami, who take it for themselves. Makoto reclaim the device by manipulating Horoboros but ironically losing it when Saki used that same monster to defeat him. For reasons unknown, the item floated to Asahi and she gave it to her brothers in order to defeat Horoboros. As of that incident, the Orb Ring NEO had since remained in their possession.

Used by Makoto to transform into Orb Dark, the Orb Ring NEO changes to Orb Dark Mode when the switch is pushed down and the ring shines purple.

The Orb Ring NEO changes to R/B Mode when the switch is pushed up and the ring shines blue. 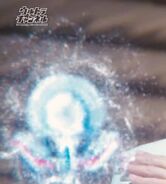 Katsumi with the device

Isami with the device

Isami passing the device to Katsumi while transformed 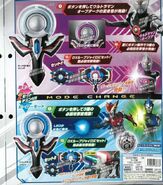 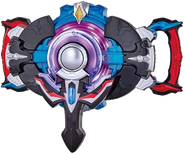