―Transformation announcement for Fusion Up forms

"Unleash the power of Orb!"

Takahiro Sakurai[1]
The Orb Ring (オーブリング Ōbu Ringu) is Ultraman Orb's transformation device, used by his human form Gai Kurenai. It also grants Ultraman Orb access to the combined powers of the past 42 Ultra Warriors via the Ultra Fusion Cards. Its dark counterpart is the Dark Ring, used by Gai's archenemy and rival Jugglus Juggler.

Chapter 3: 'The Man Who Stole The Black Hole' Arc

Gai obtained the Orb Ring, a legendary item, from the Voice of Light when he returned to Planet O-50 after his journey to Planet 484, where he stopped a prison break orchestrated by Juggler. He then received his third mission, to go to Earth and stop the revival of Lord Monsters. Since then, Gai uses it to gather the Ultra Fusion Cards of previous Ultra Warriors.

Upon the defeat of Maga-Zetton, Gai harvested Ultraman's Ultra Fusion Card. Having sealed away his Orb Origin along with Orb Calibur out of guilt of Natasha's presumed death during the battle, Gai was forced to rely on the Orb Ring as an alternative to his transformation to battle against his enemies. For the first time, he used his Fusion Up to transform into Spacium Zeperion to deal with a Hungler.

During the series, when Gai defeats the Lord Monsters that Juggler summoned, Gai would harvest Ultra Fusion Cards of past Ultraman from their defeat. This allows Gai to assume his other Fusion Up forms apart from Spacium Zeperion. Upon gaining the confidence of his powers, and having the Orb Calibur returned to Gai, he still requires this device to assess his Orb Origin Form as the Orb Calibur is stored in the form of the Orb Origin Card.

Gai receives the Ultra Fusion Cards of Ginga, Victory and X through his Orb Ring, due to their combined power of bonds. He summons the Orb Slasher, which allows him to transform into his most powerful form, Orb Trinity.

Chapter 9: 'Messengers of the Netherworld Mage'

Ginga and X's Ultra Fusion Cards also allowed him to use another form, Lightning Attacker.

After spending 10 years of training with Seven and Zero in Zero's Shining Field, Seven feels that Orb is ready to unlock a new power, and gives him some of his light. This allowed Orb to obtain Ultraseven's Ultra Fusion Card through the Orb Ring's usage, and he unleashes the power of his newest Fusion Up form, Emerium Slugger, to defeat Reibatos.

In this series, a device based on the Orb Ring called the Orb Ring NEO is used by Makoto Aizen to transform into Ultraman Orb Dark and serving as a tool for Ultraman Blu and Ultraman Rosso. 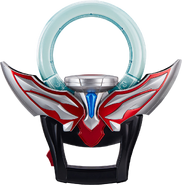 With the Tiga and Ultraman cards.

Gai Kurenai with the Orb Ring. 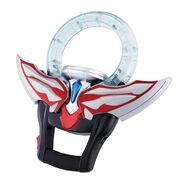 The Orb Ring in set form. 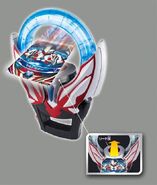