In use
The Orb Calibur (オーブカリバー Ōbu Karibā) is Ultraman Orb's original transformation device, and eventually his weapon after his evolution into Orb Origin. While operating on Earth, Gai Kurenai sealed away both his weapon and original powers for more than a century prior, forcing him to use the Orb Ring and a set of Ultra Fusion Cards as alternatives.

It is a mystical sword, which grants him command over the four classic elements of nature: Fire, Water, Earth, and Wind. When not in use, it exists as part of the Orb Origin card. As revealed in Ultraman Orb THE ORIGIN SAGA, the figure who chose Gai as Ultraman Orb took residence within the Orb Calibur and notify him of his mission over time.

After the ring of light rejected Juggler at the top peak of Planet O-50, Gai reached out to it, and he was granted the Orb Calibur, which told him his mission about the Bezelbs as well as transforming him into Ultraman Orb Origin The First. At the time, the sword is not wielded by Orb in battle but it was used as his transformation device. When the Queen Bezelb is defeated, Gai returns to Planet O-50 where the Orb Calibur told Gai about his second mission, and granted him his Orb Origin form.

On his mission to search for all four elements for his Orb Calibur, Gai journeyed across different planets, and got all four jewels for his elemental attacks, Fire, Water, Earth and Wind. This grants Orb/Gai to master the power of all elements and the ability to use Orb Supreme Calibur.

Around 1800BC (4000 years prior to the series), Orb in his Orb Origin form had wielded this sword against the Lord Monster of Darkness, Magatanothor and defeated it using the Orb Supreme Calibur. However, the battle had caused Ishtal Civilization to turn into the Hill of Death.

During the battle with Maga-Zetton, Orb's human friend Natasha Romanová was hurt by Maga-Zetton's fireball, and Orb decided to unleash the full power of his sword and used the Orb Supreme Calibur, which defeated the Lord Monster at the cost of the sword being sealed and lost along with producing a large explosion, which seemingly killed Natasha. As a result, Orb had to rely on the power of other Ultra Heroes through Fusion Up to fight against evil.

The Orb Calibur was unsealed when Gai trusted his powers again and the Orb Calibur was brought forth and summoned out from the severed tail of Maga-Orochi, which was a vital component of the Combined Lord Monster Zeppandon. Its return allowed Orb to use his original form again.

Orb before losing the Orb Calibur 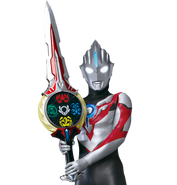