None
Opt (オプト Oputo) is a trio of mutated brother monsters from The☆Ultraman. In order from the oldest, they are Cho (チョウ, Cho), Jin (ジン, Jin), and San (サン, San).

Cho, Jin and San were originally sea creatures of similar species and a trio of brothers that lived peacefully. Constant pollutions being deposited into the sea mutated the three into giant monsters. The elder brothers have grown fangs and horns, but San's head remains the same as its personality is still docile, wanting its older brothers to stop attacking the humans.

After acquiring a large sea shell, the Opt brothers shared it and together, they attack tanker ships to feed on oil supplies, unwittingly dragging a reluctant San along with them. In their recent stop, the Opt brothers attacked several ships at the docks and rampaging in the nearby area along the way. As the Opt brothers were sleeping, the defense force put them under a tight observation. Pig managed to establish contact with San, who promises to persuade his brothers to leave peacefully.

Unfortunately by the next morning, San's plea fell on deaf's ears as Jin knocked his youngest brother unconscious. Cho and Jin resume their rampaging unopposed while San still content in persuading its brothers. Ultraman Joneus stepped in and killed the two monsters with Planium Beam out of self defense, but this provoked San into growing its fangs and started attacking. By the time it approached Joneus, San's injuries were too much for the young monster and it passed away. Joneus decided to bring San's corpse to its resting place at the ocean floor of Antarctica.

Opt about to fall asleep

The gentler Opt head after mutating 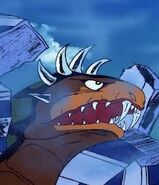 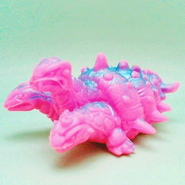 An Opt eraser
Community content is available under CC-BY-SA unless otherwise noted.
Advertisement