Open Up! (あけてくれ! Aketekure!) is the twenty-eighth and final episode of Ultra Q.

While driving home one evening, Jun and Yuriko come upon a man lying unconscious in the road. They help him into their car and drive off. When they stop at a railroad crossing, the sound of the oncoming train startles the man awake, sending him into a fit of hysteria. The man, Sawamura, has a flashback of being the only passenger aboard a bizarre train, which travels wildly through the air. The train appears to be travelling in another dimension of time and space. Sawamura bangs frantically on the windows, begging for the train to stop and let him out, when a conductor suddenly appears. Following the conductor to the next car, Sawamura discovers several other passengers aboard the train, among them science fiction writer Kenji Tomono. Jun and Yuriko bring Sawamura to Dr. Ichinotani, whose assistant uses hypnotism to calm the troubled man into a peaceful sleep; he is later released to his family. Ichinotani is studying patients who are suffering from similar delusions and, together with Jun and Yuriko, attends a conference investigating this strange phenomenon. Searching for clues, Jun and Yuriko pay a visit to Tomono's residence, only to find that the writer has disappeared. They are given an envelope containing Tomono's last manuscript, which reveals the writer's personal experience of having entered another dimension, a world free from the hassles of everyday life. Sawamura, incapable of readjusting himself into society, staggers after the flying train, crying out for it to take him back to the alternate dimension. 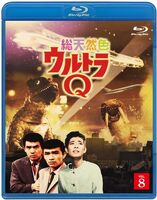