Sevenger Fight
Oni-on (オニオン Onion), also called Onion[1], is an Oni that appears in the TV series Ultraman Leo. He appears in episode 27.

Oni-on's name is a pun on "oni" and "onion", referencing his appearance and his ability to breath tear gas.

Oni-On was a Kaiju from Planet Apple, who loved to eat apples. Oni-On was first scene in his home planet, happily picking and eating apples from an apple tree. Wile Oni-On was eating, he was startled by a flock of Planet Apple Chickens, causing him to trip over a rock. Annoyed, Oni-On gave chase to the pesky birds, intending to smash them with his club. Oni-On was later seen in a village, on Earth, eating from apple trees and raiding villagers of there fruit, causing destruction as he went along. This caused the attention of MAC, who wasted no time firing at him with there jets. They were soon rewarded with Oni-On's choking gas, temporarily, defeating their forces. A now enraged Oni-On went on a short lived rampage, Destroying buildings with his club. MAC powered through the effects of Oni-On's gas breath and fired a red tranquilizer dart at his naval. This was seemingly effective in downing the kaiju. However the Apple eating Oni was only faking defeat, and downed MAC's jet. Oni-On soon moved in to stomp on the still living pilots. However the tranquilizer finally started to work on him, causing him to fall on his back. MAC then fired there guns at the kaiju. This annoyed Oni-On, prompting him to spraying his mist on them and a group of children. Later MAC come up with a plan. They hid Momotaro (a skilled archer) in a giant, fake apple. They use a Helicopter to transport the Apple to Oni-On, who is was taking a nap. Oni-On accepts the fake apple, thinking it's real, and prepares to eat it. Only for Momotaro to emerge from it and fire an arrow into one of Oni-On's eye. Momotaro fires another arrow, only for Oni-On to block it with his club. Oni-On, now angered, begins to search for his attacker. Momotaro fires another arrow, witch causes Oni-On's pants to fall down, revealing a red, baboon like butt. Embarrassed, Oni-On tries, and struggles, to pull up his pants. MAC soon began to fire at him while he pulled his pants up. Furious, Oni-On spotted Momotaro and prepared to smash him with his club. Before Oni-On could carry out this Gen summoned Ultraman Leo and the two giants began to fight. Oni-On was a worthy fighter. However, Leo gained the upper hand, due to his strength and superior fighting skills plus the fact that Oni-On's pants kept falling down, and beat the oni senseless. Leo than blew off Oni-On's horn and transformed Oni-on into one of the apple trees he loved so much, ending his reign of terror.

Oni-on appeared on an unknown planet, flanking Sevenger along side Alien Kettle, Satan Beetle, Alien Akumania, and Alien Boze. The five enemies charged Sevenger, only for the robot to be joined by Ultraman Leo to join in the fray, quickly dispatching the monsters. 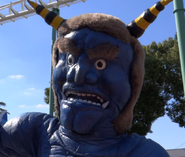 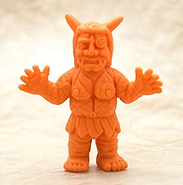