None
Okariyan (オカリヤン, Okariyan)[1] was a Kaiju that appears in the television series, Ultraman Taro.

Okariyan was the living curse of an ancient flute. Upon being given his grandfather's flute and played by a boy in the modern age, the monster was brought to life within the city. Okariyan, rather clumsily, rampaged through the city looking for the boy that brought him to life. After Kotaro shot at the monster Okariyan proceeded to dive mouth-first in a nearby building's air conditioner. Once ZAT arrived on the scene they managed to blast Okariyan into submission. Upon being defeated Okariyan disappeared. When the flute was played again Okariyan reappeared. Soon the monster danced over to the boy playing the flute until Kotaro told him to run. Upon doing so Kotaro fired at Okariyan to little avail. After the boy successfully ran and broke the flute by accident, Kotaro was nearly crushed by the monster's foot until he turned into Ultraman Taro. Once Okariyan was punched in the nose he used his snot as a bomb thrown at Taro. This caught the hero off guard until ZAT arrived and used special shackles to hold Okariyan in place. Once Taro threw the King Bracelet in the monster's mouth Okariyan was let go, tripping into a building. Taro proceeded to break Okariyan's teeth off before throwing the monster and finishing him with the Red Beam. 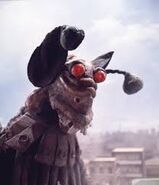 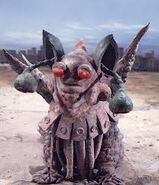 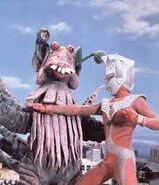 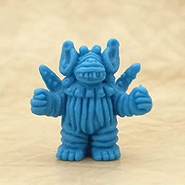