None
Oil Drinker (オイルドリンカー Oiru Dorinkā) was the first monster (also one of Yapool's Terrible-Monsters) to appear in the TV series, Ultraman Taro. A Terrible-Monster that Yapool had created, but left unused in favour of his then-strongest creation, Jumbo King, Oil Drinker was left to his own devices following Yapool's defeat at the hands of Ultraman Ace. The creature began wreaking havoc across the seas in its quest for oil to consume, only to meet its end at the hands of Astromons, the first Super Ability Monster, and a brand new type of Kaiju from Earth supposedly stronger than anything Yapool had made.

Oil Drinker was created by Yapool and attacked a Japanese oil refinery, consuming its oil. As ZAT arrived to attack it, a man named Kotaro Higashi tried to fight it too by hijacking one of the cranes nearby. Oil Drinker however was able to snap the crane, and disappeared into the ocean.

Later that night, Oil Drinker returned to the same refinery and ZAT was already there to begin an attack. As ZAT and Oil Drinker were fighting, a massive plant lifted from the ground and took the form of the monster, Astromons, who joined the battle and fought the Terrible-Monster. Oil Drinker was no match against the more powerful Astromons, and was ultimately killed when he was eaten by his massive flower gorge. Like the Sun, Mother of Ultra

Figure of Oil Drinker, by Bullmark. 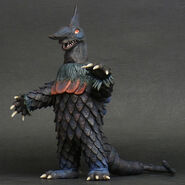 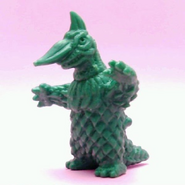 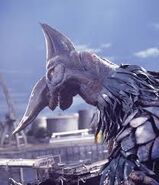 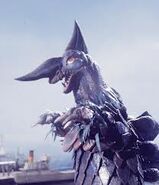 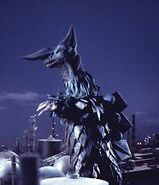