In the past three months, Obiko had been sighted, frightening villages at night with his pet, Shadow, by disguising himself as a cook with a street vendor cart while Shadow drags his customer/victim into his cooking pot at his stall. However, out of all victims, the recent one turned up to be a man, who was founded at the mountains outside Hikono village five minutes after his disappearance with his hair turned white and unconscious. Due to this, GUTS began to investigate the matter. Later at night, the team made a patrol at the village when Shinjoh began to hear a child's voice that wanted him to play with Obiko. However, thanks to advice from Horii's grandmother, he didn't turn back and proceed to walk further, causing Obiko (disguise as a cook who pulled his street vendor cart) to disappear.

When he accidentally bumped into two GUTS officer (Daigo and Horii), he ran away to avoid being arrested knowing that he is Obiko. After GUTS successfully cornered Obiko, the Yokai summoned his pet, Shadow, to deal with them before vanished into thin air. Daigo revealed that he had thrown a tracker into a pot from Obiko's street vendor to track the Yokai, which leads them to a well that the last victim of Obiko found. Meanwhile a shrine priest appeared with Daigo's tracker revealing the well had spit it when he was taking a walk at night. The priest explained that the Hikono village used to be his favorite spot for a long time ago but due to the news involving a Fitness Land will constructed soon, Obiko was furious and went on a haunting spree. While on their way back to Dive Hangar, GUTS witnessed a reporter and some citizens where they gave them an advice to stay at home in night and run away if they saw a street vendor wandering at night. Later, Obiko launched a second plan, where he hides in the darkness and frightens the Hikono village citizens for a second time by playing his street vendor pungi music. GUTS wanders around the village's dark areas to search for him, only for him to vanish and teleport to various places. At night, the whole village's citizens were ordered to stay at home, so GUTS could make their move where they used firecrackers from the well to detect Obiko and Shadow. Once they found the duo, Obiko was seen jumping happily witnessing the Hikono village in its original state. Daigo pleaded him to leave the village, but he refused, transforming into a giant. Out of anger, he transformed into his true form. Daigo turned into Ultraman Tiga. The being of light fought he who had inherited darkness. Obikonoushi was beating Tiga, who was holding back his fighting by only using defensive moves. Witnessing his village again, Obiko decided to end his life by letting Tiga's Hand Slash destroy him as the two reduced into light particles. The team knew why Obiko scared the villagers, he did not want to be forgotten. 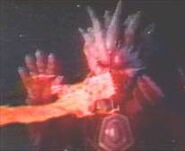