Ultraseven episode 11 "Fly to the Mountain of Evil"

Nurse was a robot dragon that accompanied its master, Alien Wild for his next assignment. After arriving on Earth, Nurse remained hidden inside of a cave while Alien Wild collected samples for his project.

After being swindled by the UG, Alien Wild called out to Nurse to attack the Ultra Guard. After a long mid-air fight, the Ultra Guard struck Nurse's tail, causing the mechanical dragon to fall to the ground. Nurse quickly turned its body into its Saucer Form. After the Ultra Guard destroyed Alien Wild as it tried to escape Earth, Nurse, now out of control, attacked the Ultra Guard relentlessly.

Luckily, Ultraseven showed up, being freed after Alien Wild was destroyed, and he chased after Nurse into a region where they could not harm the Ultra Guard. Nurse put up a tricky fight against Ultraseven, spinning around him several times making the Ultra dizzy. With Ultraseven dazed, Nurse suddenly coiled around him and tried to squeeze the life out of Ultraseven. However, Seven recovered from being dazed. After restoring his energy by absorbing sunlight with his Protectors, he burst free from Nurse's coils, splitting the machine into several pieces in the process, which finally deactivated the robotic dragon for good.

A disfigured three-headed version of Nurse named Naga appeared under the control of an Alien Serpent. Serpent hid Naga in an unknown location while he infiltrated GUYS to steal information on them and various monsters. He was eventually found out and summoned Naga to his aide. Ultraman Mebius appeared and fought the mechanical monster. After a great battle with the three head machine, Naga was destroyed by Mebius's Mebium Shoot along with its master.

Nurse along with an Alien Zetton, were sent by Ultraman Belial to keep the ZAP SPACY from reaching Rei in the Monster Graveyard. Luckily, Shin Asuka (the human host of Ultraman Dyna) suddenly appeared and fought and defeated Alien Zetton. After transforming, Ultraman Dyna flew out to space and destroyed the gold robot dragon by cutting him into several pieces with the Dyna Slash. Mega Monster Battle: Ultra Galaxy Legends The Movie

Nurse appeared as a Cyber Card in the final episode of Ultraman X. After Daichi and Ultraman X cried out to Gomora and struck Greeza right in the center of its chest, Nurse, along with all of the other Cyber Cards, traveled to X and united with him. Cyber Nurse's power was used to help form the Hybrid Armor and power up the Ultimate Xanadium to defeat Greeza once and for all. Nurse, along with the numerous other Cyber Cards and Spark Dolls, then appeared and thanked Daichi as he thanked them. The Rainbow Land

An Alien Wild somehow came to the Earth with Nurse. The alien made a "backdoor deal" with Marluru to allow them to use the schematics of the Nurse it brought, building the Nursedessei with Akito Hijiri as a result. Operation Dragon

Naga is a disfigured three-headed version of Nurse. It appeared only in the Mebius novel, Ultraman Mebius: Anderes Horizont in episode 3, "Invincible Mama".

Using the data of Nurse's Spark Doll, a cybernetic/artificial version of it was created and contained in a Cyber Card, namely Cyber Nurse (サイバーナース Saibā Nāsu). 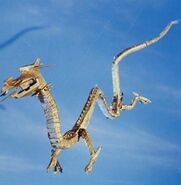 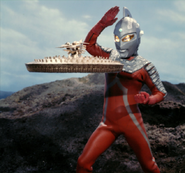 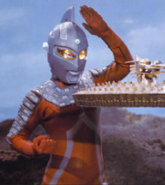 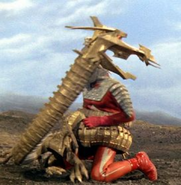 Seven being constricted by Nurse

Nurse getting cut by Dyna 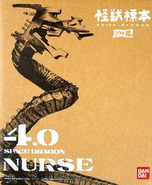 Nurse battling the Captain Ultra kaiju Amegon (with Dodongo, Peguila and Neronga behind)