―Nozomu Taiga before he transforms into Zero in the final battle, Ultraman Saga

Daigo Naito
Nozomu Taiga (タイガ・ノゾム Taiga Nozomu) is the former human host for Ultraman Zero as of the events of Ultraman Saga. He can transform into Ultraman Zero by his Ultra Zero Eye like Ultraseven's.

Some time in his childhood Taiga witnessed firsthand a monster attack, while Dyna was able to defeat the monster, his parents were lost in the cross fire and his cries for help and to Ultraman went unanswered. Since then he refused to accept the power of Ultras and held the view that mankind had grown past the need for their help as a mask for his trauma and spite. Some time later, Taiga Nozomu became a new rookie pilot from Super GUTS, with a cocky attitude similar to Shin Asuka. However, unlike Shin, who ultimately respected his predecessors, Taiga was disrespectful to the memory of his MIA superior due to his dislike of all ultras. When a set of Gran Sphere drones attacked the Mars colony Taiga took a fighter and defeated them despite being ordered to return to base by his commander.

Eventually, Taiga found himself lodged into the energy sphere of an unknown ship and transported to Earth in another universe. The same one that Zero was transported to. Watching the Ultra battle the alien fighter drones, Taiga refused to fight out of spite he directed to the Ultra.

However, after learning that the members of Team U, who had claimed to be with the Earth Defense Force, had really been faking it to protect the children, he decided to believe in Ultraman, and voluntarily transformed into Ultraman Zero in order to rescue Shin Asuka and Ultraman Dyna.

His first debut is in the movie, which he fused with Asuka and Musashi to become a new hero called Ultraman Saga.

Ultra Zero Eye: Taiga stretches his left hand out and the Ultra Zero Eye appears above the Ultimate Bracelet. The device levitates to his face and he transforms in swirls of white, red, and blue energy. 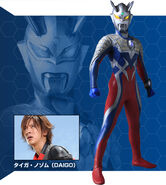