"Send a monster strong enough to shatter earth itself!"

Nova (ノーバ Nōba) is a ghost-like Saucer Kaiju from episode 49 of the TV series, Ultraman Leo. By far the best known and most popular of the Saucer Kaiju, numerous iterations of Nova have appeared throughout the Ultraman Series in the years following the original's debut episode.

Nova's design is based on the teru teru bozu, a type of handmade Japanese rain dolls.

Nova was one of the last few flying Saucer Monsters left from Black Directive. He landed on Earth in a park, and quickly transformed into a small white Teru Teru Bozu. An angry Tooru Uemuda soon came across the small Nova, and told him that he wanted it to rain. Tooru hung Nova up on a tree, and left him there when Gen Otori found him. Later that night, a drunk man came by and began hitting Nova. Nova turned red, and sprayed the man with gas, making him go crazy.

The next day was sunny, so Tooru came back to the Teru Teru Bozu to cut off its head. He was surprised it turned red, but still tried to cut its head off. After Nova avoided the scissors, it suddenly grew a bit larger and wrapped itself around Tooru's neck. Nova told Tooru he would let him see his mother, father, and sister again, and had him walk around town while spraying gas on people. Police soon cornered Tooru and were about to shoot him, but soon Gen and his caretaker arrived to stop them. Nova began to choke Tooru, but Gen knocked it off. Nova then grew giant and began attacking the city.

Nova destroyed many tanks and planes, and began spraying poison gas everywhere. Gen transformed into Ultraman Leo, and began fighting him. While a challenge at first, Leo caused the poison gas to disappear, allowing Leo to fight Nova unhindered. Leo fished Nova off with a Leo Kick, and all the crazed towns people returned to normal. Terror of the Saucer Race Series - The Red Assassin Who Beckons Death!

Nova first appeared before the GUYS crew on a dark night in a parking lot scaring them by cackling evily, but it was small and very fazy, and then disappeared before them. Unknown to GUYS, Nova was manipulating the nanotechnology that is used to bring Lim Eleking to life to make duplicates of himself to distract GUYS while the real copy is in pursuit of GUYS HQ.

The next day, the Maquette Nova appeared in an open construction field. GUYS attacked it, but it only spewed red smoke at them. Ultraman Mebius appeared and began to attack the monster, until it vanished like a Maquette Monster. Realizing about Nova's control over the nanotechnology and now how dangerously close the real Nova was to their HQ, Mebius teleported himself to Nova's location and the real battle began. At first, Nova was beating Mebius, but Miclas came to aid Mebius, and weaken Nova. Afterwards, Mebius recovered and used his Mebium Shoot to destroy Nova once and for all.

In this series, Nova is partnered with the monsters Saramandora and Lunaticks and all three monsters were guarding a military base that had supplies that the ZAP SPACY needed for their ship. Rei sent Gomora as the ZAP SPACY retrieved the parts they needed. At first Nova tried to ensnarl Gomora with his whips, but Gomora easily destroyed Nova, vaporizing him instantly with the Super Oscillatory Wave.

Nova reappeared in the movie Mega Monster Battle: Ultra Galaxy Legends The Movie as one of Ultraman Belial's 100 Monster Army. He was first seen rising out of the ground in a shot of the Monster Graveyard with King Joe Black, Verokron, Gomess, Alien Baltan, and Antlar. He then teamed up with Gan-Q, King Pandon, Verokron, Doragory, King Joe Black, Eleking, Banpira, Alien Guts, Alien Metron and Fire Golza to take on Ultraseven . He was accidentally killed along with Doragory by Belial's Belial Genothunder during the final battle.

Andro Melos and Ultraman Ribut was on a mission to sight an unknown rampaging monster without warning on a planet. Even with the help from Sora, they still couldn't find where the monster is, but suddenly, Nova appeared out of nowhere. It began to fight Melos and Ribut. After a short fight, Nova lost his will to fight them. Surprisingly, he was called to return by someone that is a Reionics Alien Babarue. It is revealed this Saucer Monster is a Reionics monster. Sometimes later, he was unleashed by his master to fight against Red King. Nova then was successfully making the Skull Monster retreat.

In the Galaxy Rescue Force base, RB summoned Nova due to Sora's curiosity about the saucer monster's biology. She took plenty of photos of Nova making RB felt irritated by that. Ribut came in and asked Sora about Nova's biology. Sora began to explain any descriptions about Nova. She asked RB if she could peek inside Nova's cape, RB prevented it but Nova, however, showed it to Sora instead. RB was jealous because he never get to see what's inside his Reionics monster, when he was about to see, Nova knocked his owner back far away.

As Daada and a mind-controlled Sora leave the battlefield, Ultraman Ribut attempt to chase them, but he, with Poccola and RB, has to deal with Daada's three kaiju. Poccola and RB convince Ribut to save Sora while they will take care of them. RB summoned Nova, and the 3 battled the kaiju. On the other place, Ribut managed to break the spell on Sora. Daada became desperate, bringing the kaiju that RB, Poccola, and Nova fought to assist him. Before they could do it, Ribut and Sora were all joined by the members of GRF, including Nova. Together they combined their beams and fired them at Daada and his kaiju, destroying them.

Nova participated in the Dark Spark War fighting alongside various monsters against Ultras until he was turned into a Spark Doll by Dark Lugiel.

Nova reappeared in episode six of the series Ultraman Orb as a Kaiju Card used by Alien Nackle Nagus in a card game between Jugglus Juggler and Alien Metron Tarude.

"Sorry for the wait, Nova. Let us make our dream of invading the earth a reality!"

It later appeared in the 22nd episode where it was first seen for real in its small size, hanging out with Black Directive as his little good luck charm and with an Alien Pitt Myu. Black Directive planned on closing down his café and leaving to another planet with Nova to start over. However, Nova didn't give up on his dream and grew into its giant form so it can rampage throughout the city. After being interrogated by the SSP, Black Directive decided to join Nova in their dream and went inside him with his crystal orb and decided to attack the city with its eye lasers.

Seeing the destruction take place, Gai Kurenai transformed into Ultraman Orb Burnmite form to confront and fight Nova. Nova initially confused the Ultra with his funny noises and movements, leaving Orb wide open for an attack from his whip. This didn't keep Orb down for long, and he unleashed his fiery fury onto the Saucer Beast, to which Nova was unfazed and downed the hero with a blast of its eye beams.

Aiming to end the fight quickly, Orb tried to finish off the monster with his Stobium Dynamite, but Nova tricked him with its teleportation ability, then grabbed Orb and sprayed him with its Red Crazy Gas. Orb shrugged it off and fought back, squeezing Nova's eyes shut, preventing the doll-like Kaiju from seeing. However, Nova shrugged him off and held the upper hand again with its whips and gas. Deciding to get serious, Orb transformed into his Orb Origin form.

In his form, after blocking Nova's eye lasers with his sword, Orb fired his Orb Supreme Calibur at the monster, who attempted to absorb the attack. Nova succeeded, but Orb's power was too much to handle, and so, it flew up into the sky and exploded like a firework.

Maquette Nova (マケットノーバ Maketto Nōba) is a duplicate of the original Nova created by the same element that used to create Lim Eleking, resulting on its temporary disappearance due to stealing said monster's energy. Due to Maquette Nova roaming the GUYS Base, various workers, including the GUYS officers, called it the Red Ghost (赤い幽霊 Akai yūrei). 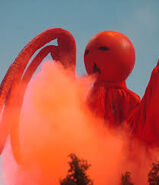 Nova reappeared in the puzzle role-playing game for mobile devices, Ultraman Galaxy as a UC (Uncommon) card that you can unlock him in one of the levels in the game with a high chance of getting Nova. 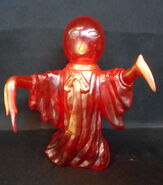 Figure of Nova, by Bear Model.

Miniature figure of Nova, by Bandai. 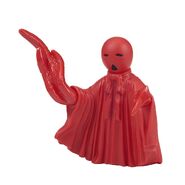 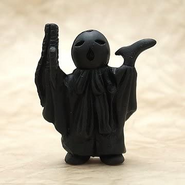