Nosferu (ノスフェル Nosuferu) is a Space Beast that appears in the TV series, Ultraman Nexus. He appears between episodes 11 through 16.

Nosferu's name is taken from the title of the vampire film Nosferatu. The Kaiju also shares Count Orlok's signature long, spindly fingers and ratlike face, with the fingers being long, deadly talons.

Nosferu's motif is that of a termite and a rat.

The personal minion of Dark Mephisto, Nosferu was first used by the evil Ultra to kill the Saida family in hopes of severing all of Dark Faust's connections to any sort of emotion that would weaken or distract him from his alignment to the Unknown Hand. With only one girl of his former family remaining, Dark Faust used Riko's body as a host to hide from Ultraman Nexus. Sometime later, during Nexus' and Faust's final battle, Dark Mephisto unleashed Nosferu to kill both of them, Faust being targeted after revealing that he still carried human emotions, thanks to Riko's sudden control of Faust's body. Just as Nosferu was about to kill Komon, Dark Faust (under Riko's control) took the blow and was fatally wounded by Nosferu's claws, killing both Riko and Dark Faust. Enraged, Ultraman Nexus turned his attention to Nosferu and battled with the Space Beast until he seemingly destroyed him with the Cross-Ray Schtrom attack. Unknown to Ultraman Nexus however, Nosferu's regenerative mouth gland lived on.

As Nosferu's mouth gland slowly regenerated his body, the Space Beast took the opportunity to feed on a family who had become friends with Komon, killing the parents and taking the children hostage. One night, the young girl of the family was taken by Mephisto's agents and was offered to Nosferu as a sacrifice. Taking the girl as his hostage, Nosferu was now untouchable, because Nexus was afraid to injure the girl. The Night Raiders arrived and used a new weapon of theirs to destroy Nosferu, but again the gland was untouched in his destruction and to worsen the situation, Nosferu's young hostage was lost in the battle.

Shortly after regenerating thanks to the gland, Nosferu now turned his attention to the Night Raiders and tried to kill them. Ultraman Nexus, now having learned how Nosferu was able to regenerate, exploited his weakness by aiding the Night Raiders, holding open Nosferu's mouth. Komon shot inside of the Space Beast's mouth, scoring a direct hit. Nosferu's gland was destroyed by Komon and with it, Nexus again destroyed Nosferu with the Over-Ray Schtrom, this time for good.

Nosferu appeared in this short novel, where he was a Spark Doll MonsLived by Android One Zero.

Set one year before Ultraman Victory's debut, Android One Zero MonsLived into Nosferu and turn several humans into Beast Humans. Her actions would attract several humans into believing an ongoing paranormal activity occur. An environment protection group called "Mountain Peanuts" protected Nosferu from UPG and Self Defense Forces, claiming it as a protected species, not knowing the danger it carried. Nosferu quickly attacked and used its Beast Humans as human shields. Chigusa Kuno, whom just happened to be nearby was granted the Ginga Light Spark and transform into Detton. However, having no experience with this monster, made her swapped into Ultraman instead. Chigusa/Ultraman firstly used its Spacium Beam for thirty seconds but Nosferu survived and regenerate from the injury. She quickly fires Ultra Slash which ended up cutting Nosferu's arms though still able to resist the injury. In a last effort, Nosferu took the Mountain Peanuts leader as hostage but the other members freed him, allowing Chigusa/Ultraman to firstly fired his head with Slash Beam, followed by Ultra Attack Beam and Ultra Psychic attack. Android One Zero made out safely but swearing revenge as she would launch her next move a year later. Mountain Peanuts

Nosferu was among the monsters taken by Charija as part of his monster business but was released as vanguards to secure the Red Sphere. When Tsutomu brought GUTS and Super GUTS to his universe, Nosferu fought against GUTS Wing 2, regenerating from the Dexas Beam very quickly. When GUTS Eagle entered the fray, the jet splits into three and the GUTS Eagle Alpha (piloted by Asuka) struck the monster's weak point. Nosferu was among the monsters, whose cells merged into Demon Gyrares XIV. Tiga, Dyna, and Ultraman Gaia Novel: The Adventure in Hyperspace 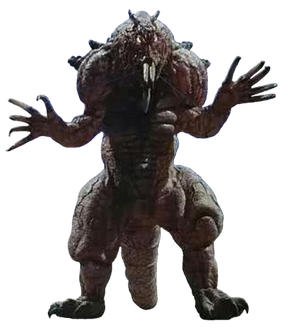 Nosferu appears in this game as an enemy on Nexus Mode and later a playable character. To obtain it, the player has to defeat Nosferu on Nexus Mode. Ultraman Nexus (video game) 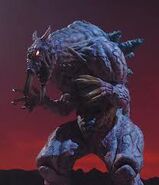 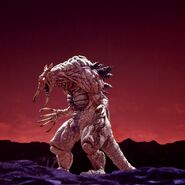 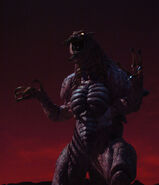 Nosferu in his 5 meter appearance. 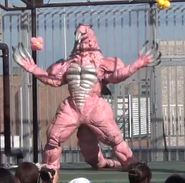 Nosferu in a stage show