Nokogilin (ノコギリン Nokogirin) was a space Kaiju that appeared in the TV series, Return of Ultraman. He first appeared in episode 26.

Nokogilin landed on Earth via a comet. In its beetle form, Nokogolin killed a man who was using a shaver. MAT first dismised the case as a murder case. Then a women with a hair dryer was murdered and dropped lipstick that were of the same brand of Aki Sakata's, with this MAT figured out that Nokigolin is a dangerous beetle.

Aki, walking home from the movie theater, encountered Nokogilin trying to eat her lipstick but Aki managed to step on the beetle causing it to flee. Later, Jiro Sakata found Nokogilin but mistook it for a 3 horned beetle which could bring him 25,000 yen and caught it. After MAT called Jiro's brother, Jiro hid the beetle only for it to wake Aki up from sleeping.

MAT had gotten hold of the killer insect from space and contained it in a glass cage. All attempts to destroy the bug with weak beams of energy failed, and thus it was moved to the target range where the members could bring out their bigger guns. Firing away at the aquarium with anti-kaiju firepower, they shattered the glass and struck the insect inside, but it survived. The beetle somehow mutated and grew, becoming a bipedal monstrosity. As MAT continued to fire, the insect vanished, forcing the team to begin the search anew. As their plane flew over the city, the ground began to split and a massive creature crawled forth. The war was on again, but the creature’s exoskeleton acted as armor and allowed it to withstand all their attacks. Go transformed into Ultraman Jack, but the insect was able to contend with the new hero. Using its bolt and pincers, the insect brought Ultraman to the limits and shrugged off the mighty Spacium Beam! As his power began to run dry, the hero managed to sever off its antenna with his Ultra Bracelet , removing its ability to fire its bolts. As pain racked Nokogilin, the hero used his Hand Blast to completely destroy the creature in a huge explosion.

Nokogirin reappears in the series Redman.

Nokogirin first appeared in episode 32 where he, at first, fought Redman alone and had the disadvantage. Even when Eleking showed up to help the monster, Redman never gave up and held his ground against them. After defeating Eleking, the hero killed Nokogirin with a Red Arrow to the back when he tried to run away.

In episode 35, Nokogilin teams up with Bemstar and Sartan to take on Redman and even though they held the team advantage against him, the hero never gave up and held his own against them. Eventually, Redman killed all of the monsters by throwing his Red Knife at them and made them collapse on each other.

Nokogilin's final appearance on the show was in episode 38. Redman was fighting with Beacon at first. However, after he sent Beacon rolling down a hill, he seemingly transformed into Nokogirin and later, back into Beacon. Eventually it was revealed that there were actually two kaiju. They decided to fight together but they were no match for the hero even though they had the team advantage. They were eventually killed when Redman tricked them into running into his Red Arrows. 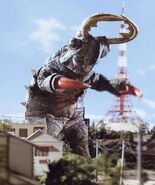 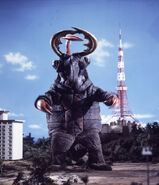 Nokogilin and Eleking vs Redman

Nokogilin as it appears in a stage show