Mirror Fight
Noah (ノア Noa) is a giant robot that appeared in the Mirrorman series. She also was one of the 'four Kaiju stooges' in Mirror Fight.

Noah was one of the many attempts by the alien invaders to take over the Earth. This robot was disguised as a human woman with a red cape and a flute when an Invader ship first beamed her to the surface one night. Kyotaro encountered Noah only for it to teleport out of his reach. He reported it to the SGM who believed it was an attempted to disrupt a science council on Earth's defense. Noah took the identity of a flute player in a marching band named Junko, her false identity quickly noted by Kyotaro the next morning. Asako investigated at his request, soon finding the real Junko and two men dead in a closet. Noah proceeded to knock Asako out and used a pin to mind control her via its flute. The next night Kyotaro noticed Asako in a trance while Noah was outside the base. Asako unwillingly grabbed paperwork detailing the council's seating and followed Noah outside and toward a house the machine had the entire band under her control. It instructed the unwilling servants to place bombs the next morning. Kyotaro tried to attack Noah, but it sent the band on him via flute playing, eventually restraining him with webs.

That morning Kyotaro was strapped to a cross with Noah standing over him and detonating a bomb. Believing Kyotaro died the machine grew in size to reveal its true form. Barely alive from the rubble crashing down on him, Kyotaro transformed into Mirrorman using the reflection of the bell on Noah's flute. The hero's attacks were unable to phase the robotic monster's armor, eventually its stun rings trapped him in midair during the fight. Noah's barrage briefly knocked Mirrorman out as he was let go from the air and crashed. Realizing how close the bombs were to detonating, Mirrorman got up and flipped Noah followed by using a pile driver on it. However, it and even a use of the Silver Cross were not enough to outright stop the robotic monster. A second Silver Cross was fired, finally destroying Noah just in time. 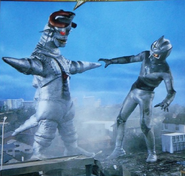