None
Niruwanie ( Niruwanie) is the very first Neo Ultra Q monster to appear. Every thousand years, a single Niruwanie appears, travels to the ancient Ryuga Forest, and dies by merging with one of the forest's many trees. Over the millennia, many Niruwanie have contributed to the forest in this way.

The monster awoke to migrate north, not harming any humans. Professor Yashima discovers an ancient scroll, which reveals he appeared a thousand years prior, during a solar maximum where sunspots appeared, and walked north. He also discovers Ryuga Forest is a Niruwanie graveyard.

Many humans call for the monster's life and death in the streets of a nearby city, with the situation escalating into violence between the two sides. Only when it reaches the grove does the military attack. Despite this, it manages to reach a tree in the center, and it glows and joins it, becoming one with the tree as it dies. At the same time, it somehow clears away the sunspots. 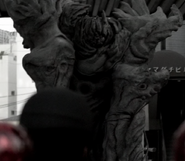 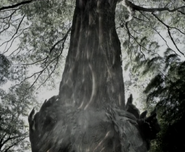