Many of these gentle giants were victims to the Alien Godmes invasion, and when the time came, they assisted the red warrior, Koseider in his battle.

One Nipponosaurus was seen attempting to fight Tyrannosaurus Jackie but was tossed off a water fall and killed.

One Nipponosaurus seemed to lead the princess and the robot to a location.

An individual that survived an Alien Godmes attack on a dinosaur reserve farm, was adopted by the Koseidon Corps, and shows some intellect, such as learning tricks. 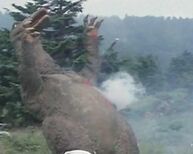 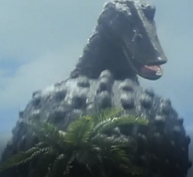 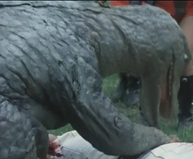 A side and front view of the dinosaur, which is shown in the episode. 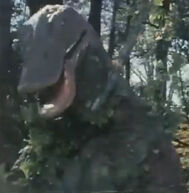 Nipponosaurus getting trapped in Baribaa's vines
Community content is available under CC-BY-SA unless otherwise noted.
Advertisement