"Akame-sama, the guardian god of Kuzuryu Village, sleeps at this shrine.
In the ancient past, Akame-sama fell from the sky during an eclipse, and to provide tribute it, the people of Kuzuryu gave up their lives and became human sacrifices. Everyone who was sacrificed had entered a state of depression and fell into a sleeping illness. A graceful shrine maiden showed mercy to Akame-sama, and quelled it into this shrine."

―The legend of Night Fang, who was known as "Akame-sama" to the people of Kuzuryu Village

Night Fang (ナイトファング Naito Fangu)[1] is a Kaiju that first appeared in episodes 7 and 8 of Ultraman Taiga.

Night Fangs were a species of monsters that induced nightmares in humans and Ultras through sound waves.

A Night Fang arrived in ancient times at Kuzuryu Village during a solar eclipse, and caused disasters. However, the villagers were protected as long as they gave it human sacrifices. These sacrifices eventually led the village to go off the map as all the visitors, and the villagers themselves, sacrificed themselves to Night Fang. It was sealed into a mountain by a shrine maiden, who used the power of a shining sword formed from the energy of the Earth to trap it within a mountain. The village remained populated by the spirits of those sacrificed to Night Fang.

Many years later, it is both revered and feared by the villagers, who call it by the name Akame-sama (様, Akame-samalit. Lord Red-Eyes). An Alien Babarue and his accomplice Alien Hook disguised as ordinary humans to unleash Night Fang, but they needed to use the net idol Ai Tennoji's powers, since she was the reincarnation of the shrine maiden who once sealed away Night Fang. To that end, the Babarue posed as her producer. Eventually, the aliens took off their disguises and forced Ai to unseal Night Fang, who reappeared under an eclipse after the aliens were dealt with, and the spirits of the sacrifices disappeared. It easily blasted Ultraman Fuma down with its fireballs and fought against Ultraman Taiga but Taiga was no match for it. To the Demon's Mountain!! Even after getting hit by the Aqua Blaster, Night Fang took off towards the city.

As soon as it landed, Night Fang emitted sound waves from its third eye, causing everyone in the vicinity to fall asleep and get trapped in nightmares, which Night Fang fed off of. Luckily, Pirika Asahikawa, who was still awake due to wearing headphones that muffled out the sounds, woke the city up using a noise cancelling wave. Hiroyuki Kudo quickly transformed into Taiga, but was still not a match for Night Fang. Seeing this, Ai Tennoji went to aid Taiga by drawing out the remains of the Earth energy within Night Fang, to summon the sword of light that once sealed it away, and granted it to Taiga. The Taiga Key Holder reacted with it and absorbed its energy, transforming Taiga into his new form, Photon-Earth. With the power of the Earth within him, Taiga trounced Night Fang and destroyed it once and for all with the Aurum Strium. From its remains, the Night Fang Ring emerged and was retrieved by Hiroyuki. Defeat the Demon

Night Fang returned when Kirisaki summoned it from its Kaiju Ring to stop Ultraman Fuma and Ultraman Titas from reaching Taiga, who had been corrupted by Ultraman Tregear. However, Titas, Fuma and Hiroyuki had managed to rescue Taiga from the darkness, granting him his newest from - Tri-Strium. Using the Taiga Tri Blade, Taiga finished off Night Fang by slashing it repeatedly. We Are One

As Ultraman Taro and Ultraman Tregear were investigating strange energy readings on Planet Deastar, a Night Fang was summoned by Absolute Tartarus. Taro engaged him in battle, but was powerless to stop Night Fang from firing his Nightmare Wave at Tregear, causing the Ultra to experience visions of his former Chief turning to the dark side. Tartarus conversed with Tregear afterwards, showing him his future and eventually convincing him to join his cause. Taro meanwhile finished off Night Fang with his Ultra Dynamite, but was too late to reach his friend. The Divergence

Night Fang being sealed away

Night Fang, as depicted from an ancient drawing 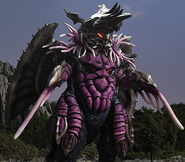 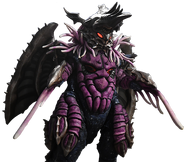 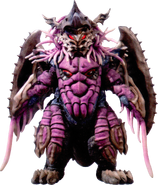 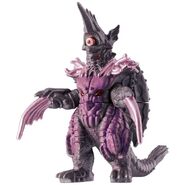 The legend of "Akame-sama", described on a board