Neronga (ネロンガ, Neronga) is a recurring dinosaurian Kaiju in the Ultraman Series. It debuted in episode 3 of Ultraman. As with Pagos, Gabora and Magular, Neronga's original suit was represented by modifying the suit for Baragon; Neronga is the second monster in the set whose suits were produced in this way.

Neronga was said to be a small monster that lived in an old well some time in the Edo period. At some point supposedly, a samurai named Suneemon Murai ( Murai Suneemon) fought and killed Neronga, though it would seem to turn out he merely sealed Neronga in its home. Over the next hundreds of years, the monster sat at the bottom of the well, developing the ability to convert electricity into energy to survive.

From the abundance of electricity in the underground, it caused Neronga to grow huge. It remained quiet. That was until two years before its appearance, a power plant was constructed near its resting place and drained the ground of its energy, slowly starving Neronga where it would eventually reawaken in modern day.

Awoken by man and bellowing in hunger, Neronga emerged from underground, and headed for a nearby power plant to drain the energy. Soon the Science Patrol is called in to locate the monster. On arrival, Neronga was invisible and attacking a Transition Station, attacking and the Science Patrol began to open fire with their lasers, only angering the beast, who struck back with a beam of electricity. The crew survived, but Neronga escaped, looking for more energy.

Predicting Neronga would attack at another power plant, the Science Patrol forced the monster to become visible with their weaponry. Enraged, Neronga fought back by hurling a huge ship, destroying the entire plant and resumed attacking the Science Patrol with his electric bolts. One of the Science Patrol members managed to blow out one of Neronga's eyes but this only angered the monster even more. Hayata transformed into Ultraman and manhandles the beast, beating him like crazy, but Neronga still fought back. Before long, Ultraman tossed the monster into the air, and finished it with the Spacium Beam. Science Special Search-Party, Move Out

Neronga was first seen battling against a Gudon. At first it seemed Gudon had the upper hand, but when Neronga used its invisibility ability to outsmart and distract Gudon long enough to kill it with electricity bolts. After the match, Neronga proceeded to feed on the electricity of a nearby radio station. The next day, Neronga was wandering the area looking for more electricity, ultimately setting its sights on the ZAP SPACY where the monster attacked them looking for more electricity. Rei summoned Gomora to do battle against the monster and it seemed Gomora had the upper hand, but Neronga used its invisibility ability against to try and distract Gomora to kill him. Listening closely to Neronga's movements, Rei guided Gomora into attacking the invisible Neronga and successfully destroyed the monster as a result. The Transparent Monster Attacks!

Sometime later when the monster Bullton appeared before ZAP SPACY, Neronga was revived alongside Red King and Telesdon. Neronga was the first to charge into battle against Gomora and Litra. While Telesdon fought Litra, he accidentally killed Neronga with its flame breath. The Stone Which Calls Monsters

Neronga, alongside Kelbim and Giestron, was sighted by the Galaxy Rescue Force, Ultraman Ribut, Poccola, and RB are sent to fight them. Ribut quickly defeats them with the Remote Cutter. But somehow they were revived by a mind-controlled Sora who approaches the GRF members. Daada also appeared and explains his true motif, he also said Sora created a device in which the kaiju gain unlimited energies. When Poccola is about to perform an uppercut to Daada, Neronga blocks his attack. Daada and Sora then leave, thus leaving the three kaiju fighting the three Galaxy Rescue Force members. As Poccola and RB convince Ribut to save Sora, they fight the monsters, with RB summoning his Nova and fighting alongside him. Later, Daada had no choice to bring his three monsters from the battle to assist after Ribut saved Sora. Not long after, all of the GRF members came to help Ribut and Sora. They fired their beams at Daada and his monsters, destroying them for good.

It is evidently that Neronga's Spark Doll was collected and used to create Cyber Neronga (サイバーネロンガ Saibā Neronga). The monster's design was used by Xio as one of their target practice, alongside Cyber Zarab. Feature Report! 24 Hours Inside Xio

Cyber Neronga reappeared as a Cyber Card in the final episode of Ultraman X. After Ultraman X spoke out to Gomora and striked Greeza right in the center of its chest, Neronga, along with all of the other Cyber Cards, traveled to X and united with him. Cyber Neronga's power was used to help form the Hybrid Armor and power up the Ultimate Xanadium to defeat Greeza once and for all. Neronga, along with the numerous other Cyber Cards and Spark Dolls, then appeared and thanked Daichi as he thanked them. The Rainbow Land

Neronga was summoned by Saki Mitsurugi, who had recently taken over Aizen Tech. She used Neronga to redirect electrical energy from a nearby electrical tower to Aizen Tech's premises, for purposes unknown. Ultraman Rosso and Ultraman Blu arrived to deal with Neronga, but they were both caught off guard by its invisibility powers and electrical attacks. After giving them a beatdown, Neronga was recalled by Saki, reverting it back to its R/B Crystal.

When Katsumi Minato and Isami Minato confronted Aizen Tech's new president while she was talking to Asahi Minato, she revealed herself to be the one summoning monsters recently as she unveiled her special Gyro to call Neronga into action again. The brothers transformed to fight, and this time they thought of a way to counter its invisibility, which was by covering it in sand. The brothers then used the power of the Kiwami Crystal to transform into Ultraman Ruebe, who finished it off with the Ruebe Kourin Shot after a brief fight. This Moment Is A Bond

Neronga, along with several other monsters sleeping underground across the globe, was awakened after Genegarg crash landed on Planet Earth. It appeared in Atayama City, Shizuoka, intending to feed on electrical lines there. Haruki Natsukawa sorties in Sevenger to deal with the monster, but was easily defeated due to its invisibility. Haruki tried to transform into Ultraman Z , but the Z Riser refused to activate. Neronga drained Sevenger of its energy before escaping once again. As a result, Haruki was given a harsh sparing session by his superior, Shota Hebikura, who told him not to just rely on what he sees.

The STORAGE members worked together to come up with a plan to defeat Neronga. Yuka Ohta managed to create a device that could disrupt and release Nergonga's electrical charge into the air when fired at the base of its horn, but the team only had one shot as they could create only one of them in a hurry. Neronga appeared again near the Clean Infinity Power Plant, but had consumed much more electricity than before, making it even more powerful. Haruki to shoot a tracker at it so that Yoko Nakashima could fire the electrical dispersion device, but Neronga's increased power was unexpected and was able to knock Sevenger over.

This time, Haruki was able to transform in Ultraman Z Alpha Edge and fight against Neronga. Remembering his training session from earlier, Haruki used his senses to detect Neronga instead of seeing it, and allowed him to accurately attack it. Yoko managed to fire the device at Neronga, canceling out its electrical powers, though it went invisible immediately. Detecting Neronga through sense once more, Z fired the Zestium Beam at the monster and destroyed it. After Haruki and Yoko returned to the base, Yuka went off to dissect Neronga's remains, including part of its horn. A Warrior's Principle

Neronga's horn was later put to use in powering up Windom, which had an initial charging time of four days. Yuka had noticed that the piece had caused Haruki's pudding that had been stored in the same fridge, to become roasted. Rembering what Kojiro Inaba had said earlier about unexpected things becoming useful later on, she hooked up the organ to some electrical equipment that ran into Windom, amplifying the electricity enough to fully charge the mecha, that promptly sortied to help Ultraman Z fight against Telesdon. After the success of the operation, Yuka announced that she planned to artificially recreate the organ to circumvent Windom's charge time. Robot-2 Activation Plan

Alongside the male Red King, Guigass, Gomora and Peguila, Neronga later appeared in a flashback experienced by Haruki as a result of the guilt he felt from killing them in battle. The Cry of Life

At some point after SSSP's formation and Pagos' death, Neronga appeared in the Tokyo metropolitan area and begins absorbing electricity from a nearby station. Off-screen, the JSDF army fought against Neronga, but the monster used its electricity to disable the guided missiles.

While moving to Minobu in Yamanashi Prefecture, Neronga then faces against Ripia, who would be known as Ultraman in the latter's first arrival on Earth. Neronga tries to shoot Ultraman with volts of electricity, but the silver giant shrugs it off as if nothing happen and slowly marches forward. A frightened Neronga tries to flee, but Ultraman kills the monster with Spacium Beam.

The result from Ultraman's attack accidentally killed the SSSP member Shinji Kaminaga while he was protecting a young boy behind Neronga, thus creating a string of events where Ultraman poses as the officer to cover up his tracks. Shin Ultraman

Neronga (Mutant) (ネロンガ(変異種) Neronga Hen I-shu) is an empowered and mutated breed of Neronga in the Nintendo DS game Kaiju Busters. The body color is darker than the original, the eyes are discolored red with no pupils, and the number of thorns increases.

Neronga appears in two mini-videos for this video game to act as sport for the main alien trio. His head has plasma crystals that, when destroyed, act as game points for the player.

After the Rush Hunters Barel, Magna, and Garm take the Red King's Plasma Souls, a thunderstorm awakens the Neronga, who attacks the hunters after feeding on a lightning bolt. Garm uses the Hawkeye Shot several times, but to no avail. Magna spies its footprints, and attempts to use Force Sabre, but bounces off the creature's forehead and flies into a stalagmite. Garm then tells Barel and Magna that Neronga can only stay invisible for a certain amount of time after absorbing some electricity. They regroup as Neronga absorbs another lightning bolt and vanishes. Garm then gives the others his plan, which is put into action. Barel uses his copies as decoys to make the Neronga shoot out all its energy. Magna uses his metal arm as a lightning rod, to prevent the Neronga from absorbing any more lightning. As soon as Neronga becomes visible, Barel uses his scarf to bind Neronga's nose horn and trap it long enough for Garm to shoot its Plasma Souls.

Neronga appeared in this game, as well as a black-colored subspecies called Neronga Black.

A pair of Neronga appeared in Marvel Comic's The Rise of Ultraman, being dealt with by Ultraman and his human ally.

Ultraman: A New Power of Singapore

A Neronga, alongside a Red King and a Gubila, surfaced off Singapore, and converged in the center of the city. Ultraman appeared and did battle with the three kaiju, only to be tossed aside. An unlikely alley, the spirit of the Merlion, appeared and aided the warrior of light in defeating the three aggressors. 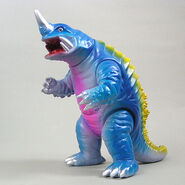 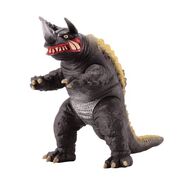 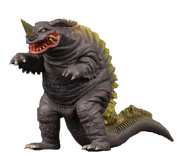 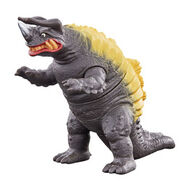 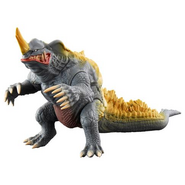 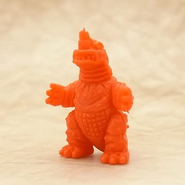