Fireman episode 9 "A Challenge from the Deep Sea"

Nerogiras (ネロギラス Nerogirasu) is a Kaiju from Fireman, appearing in episode 9. An extremely strong carnivorous monster, Nerogiras holds a particularly gruesome reputation for effortlessly killing three monsters, ripping them to pieces with his bare hands, before being put down for good by Fireman.

Nerogiras first appeared killing the second Stegorus with ease, ripping its head from its body. While feeding on Stegorus, SAF stumbled upon it within their submarine. They opened fire. This made Nerogiras angry, and he hurled the carcass at the vessel, causing it to make an emergency surface.

Determined to deal with the beast before it could attack humanity, S.A.F. located it just as it killed another monster. Nerogiras made its journey to land where the self-defenses forces unleashed everything they had upon it. However, no weapon could bring down Nerogiras. Misaki transformed into Fireman with the Fire Stick and battled it, but the tides were turned when Nerogiras sprayed his Red Slime at the hero. Left blinded by a jet of blood to the face, Fireman was unable to get back up from the ground as the Kaiju turned its attention toward humanity once again.

Using the last of his power, Fireman rose to feet to continue the battle. He blasted off Nerogiras tail with the Fire Laser, as Nerogiras turned around, Fireman launched his Fire Spark. The flames eventually engulfed Nerogiras, who then exploded violently. 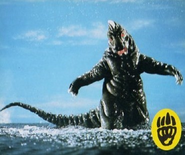 Nerogiras vs Gudon
Community content is available under CC-BY-SA unless otherwise noted.
Advertisement