Neosaurus (ネオザルス Neozarusu) is a Kaiju that appears in the series, Ultraman Dyna. He appeared in episode 16.

Neosaurus was originally an underground monster who was found sleeping by Professor Otomo, a former TPC scientist who was banned due to his studies for creating his own monster. The scientist then took him to his lab and injected several cells of different monsters and a controlling device into him. The scientist then created clones of two other monsters: Silvergon and Sildron, as test subjects. Due to the scientist's discovery that Hanejiro had the intelligence of a second grader, the scientist kidnapped Hanejiro and took him to the secret island where he kept his hyper clone. As soon as Super GUTS found out about his crimes, Asuka, Kouda, and Nakajima were dispatched to find the island. Due to the Island's magnetic field, the crash landed there and encountered a battle between Clone Sildron and Clone Silvergon. After Silvergon killed Sildron, he attacked Super GUTS. Then, the Scientist's assistant was caught by Asuka, who brought them to the main lab. As the Scientist revealed what he has been doing, Kouda and Nakajima began to try and arrest him, but a quick electric web shielded the Scientist. Asuka overheard the conversation when Kouda left his radio on and rushed to their rescue Silvergon then appeared and Began to attack the lab as well, attracted by Asuka's appearance. As the last resort, Professor Otomo released Neosaurus, who killed Silvergon by throwing him onto the lab, then killing him with his Helix beam. Unfortunately, Neosarus never got Hanejiro's intelligence, and since the lab was destroyed, Neosaurus malfunctioned, and killed the scientist by stepping on him. Just before he could kill Asuka, Dyna appeared. Unfortunately, Neosaurus's spikes prevented Dyna from attacking, and he himself began to beat Dyna with his tail. After Dyna fell, Neosaurus then stepped on the giant. It was then when Dyna transformed into Strong Type. A short mash-up later, Neosaurus fired his Helix Beam, and Dyna dodged behing his tail. Raising his tail up, Dyna succeeded in blowing off the Kaiju's tail, and a beam clash ensued. Dyna's Garnate Bomber won, and Neosaurus fell over, and exploded. Battle! Monster Island

Neosaurus later appeared as a flashback in episode 47. Farewell Hanejiro 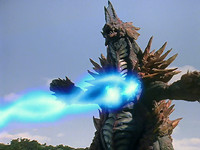 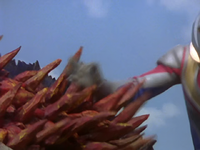 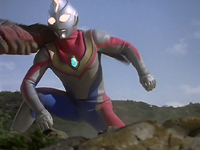 Neosaurus was made two times as a toy by Bandai, once for the 1998 and once for the 2000 lines. However, the 1998 version was technically released twice. The original release had a red color on the chest area for the Helix Beam, while the second release had a blue color. The paint of the figure later became clearer in the 2000 version. The figure sports articulation in the arms and legs, with a glue-sealed tail. The toy is, however, too short to be in scale with other figures. Neosaurus is labeled number 115 in the 1998 version and 48 in the 2000 version. 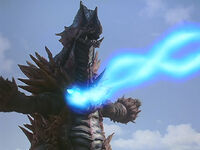 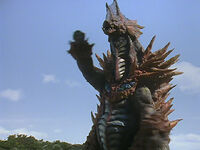 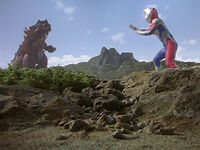 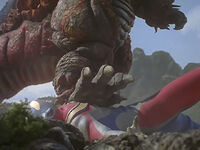 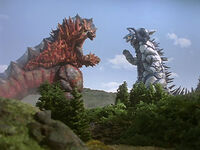 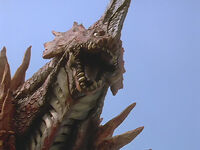 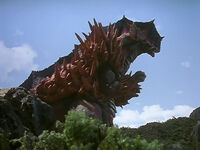 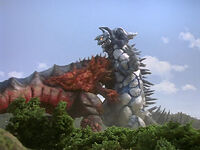 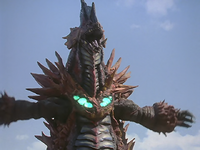 Neosaurus charging up its Helix Beam

Add a photo to this gallery
Retrieved from "https://ultra.fandom.com/wiki/Neosaurus?oldid=530127"
Community content is available under CC-BY-SA unless otherwise noted.