Ultraman Wiki
Register
Don't have an account?
Sign In
Advertisement
in: Heroes, Other Heroes, Teams,
and 8 more
English

SSSS.GRIDMAN episode 12 "Awakening (Finale)"
The Neon Genesis Junior High Students (新世紀中学生 Shinseki Chūgakusei lit. New Century Middle School Students) is a team of four in SSSS.GRIDMAN. They have some connection to Gridman prior to the start of the series and are really his Assist Weapons in human form.

After Gridman lost to Alexis・Kerib prior to the series, his consciousness was split into five parts. Excluding one that possessed Gridman's chosen host Yuta Hibiki, those parts became self-aware and formed into their own entities who later known as the Neon Genesis Junior High Students, who made it their mission to help Gridman against the coming challenges. Even so, the group later revealed to still carry fragments of Gridman that spawned them inside their very being before eventually returned said fragments to Gridman so he can regain his true form.

The first of the team to come in contact with the Gridman Alliance was Samurai・Calibur, who watched over Yuta, and then visited Gridman in the Junk Shop to give him an optimization upgrade. He then transforms into the Assist Weapon, Gridman Calibur, to help Gridman slay Dévadadan. Restoration

When Anti appeared and defeated Gridman, the rest of the team went to meet up with Calibur, who was previously defeated along with Gridman. When the battle was over, Gridman revealed their identities to Yuta and Sho. Defeat They continue to help Gridman and Yuta throughout the course of the series. They also watch over the Gridman Alliance when they are off duty. Contact

Noticing that the enemy's activity was increasing, the four of them went to Tstsujidai high school to keep a lookout, but they were chased out and reported. They later sortied together to form Full Powered Gridman to put an end to Mecha Ghoulghilas. Confrontation They later formed Powered Zenon, which made quick work of Bujack. Dream

After watching over Yuta, who was stabbed Akane and hospitalized, the Neon Genesis Junior High Students realize that they and Yuta were all parts of Gridman, and helped to restore Junk so that Yuta can wake up. Once Yuta awakens, they, along with Yuta who had been taken over by Gridman, merged into Full Powered Gridman just in time to aid Gridknight in defeating the many Kaiju that Alexis resurrected. Decisive Battle In the final battle against Alexis, the Neon Genesis Junior High Students, along with Anti and Yuta, gained Acceptors which allowed them all to restore Gridman's true form and ultimately defeat Alexis, reducing him into a single fragment and was later sealed by Gridman. Once the battle ends, the fully restored Gridman, along with the Neon Genesis Junior High Students who now are completely separate entities to the Hyper Agent, say their final words to Rikka and Sho before departing back to the Hyper World, having completed their mission. Awakening (Finale)

Gridman Calibur Axe Mode (グリッドマンキャリバー・アックスモード Guriddoman Kyaribā Akkusu Mōdo)[1] is wielded by Powered Zenon. The Axe Blade part opens up and is moved nearer to the tip of the blade.

Gridman Calibur can alter its color to be utilized by Gridknight, who wields it in reverse-sword grip. 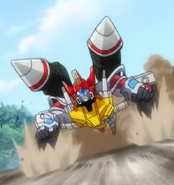 Sky Gridman (スカイグリッドマン Sukai Guriddoman) is Gridman's form when he combines with Sky Vitter. While wearing this Assist Weapon, Gridman gains an increase in flight speed and aerial combat proficiency.

When all the Neon Genesis Junior High Students transform and gather, they can combine into more powerful forms.

Full Powered Gridman (フルパワーグリッドマン Furu Pawā Guriddoman lit. Full Power Gridman) is Gridman's greatest combined form. Buster Borr forms the main body, Sky Vitter forms the legs and Battle Tracto Max forms the arms while he wields the Gridman Calibur, with the Axe Blade jettisoned, joining Buster Borr as a chestplate, essentially making it a combination of all his other combined forms. However, due to the strain on Junk, Gridman and the Assist Weapons manifest at a fraction of their normal size though when combined, this form stands at a height comparable to Gridman's normal stature.

This section is for combinations that are used only in supplementary media.

Full Powered Gridman Initial Fighter (フルパワーグリッドマン Furu Pawā Guriddoman Inisharu Faitā) is a form that Gridman takes in SSSS.GRIDMAN NOVELIZATIONS Volume 2. It presumably has all the same powers as the normal Full Powered Gridman, but weakened.

Its design is based on a limited-edition toy produced by Good Smile Company.[4]

Powered Fortress (パワードフォートレス Pawādo Fōtoresu) is an alternate combined form of the Assist Weapons without utilizing Gridman. It appears in SSSS.GRIDMAN NOVELIZATIONS Volume 2, somehow operating at 100% power. It was formed by another set of Assist Weapons from the looped backup world, operating at 100% power without having to scale down. When Full Powered Gridman rides on the vehicle, he becomes Full Powered Gridman Over Spec Mode. Gridman wields a combined Gridman Calibur, which forms double-sided blade with uneven length due to the difference in scale of the two Gridman Caliburs.[5][6]