Natsunomeryu was a peaceful dragon that slept in Lake Natsukawa for centuries until his shrine was disturbed by greedy businessmen who wished to transform his land and village into that of a resort for tourism. A girl who had guarded Natsunomeryu's land refused to allow them, informing them of the dragon's legend. Using her stories as bait, the businessmen used her words as rumor, transforming Natsunomeryu's legend into a Loch-Ness Monster-esque manhunt, with DASH as one of the searchers. These action inadvertently transformed the girl and Natsunomeryu's land into the tourist nightmare she feared.

Now with his land ravaged with greed and blind ambition, Natsunomeryu awoke and furiously attacked the village he once protected, which was now populated with tourists. Not wanting to see anyone harmed, Kaito transformed into Ultraman Max and quickly put out the dragon's flames with the Icing Wave shortly after incapacitating Natsunomeryu. The dragon and the Ultra then locked in battle with Max having the upper hand. However just as it seemed Max was about to finish off Natsunomeryu with his Maxium Cannon, he was stopped by the girl whom had protected the dragon's land. Realizing that Natsunomeryu was just an angry monster after the vandalization of his land, Max fired his Purifying Beam at him and allowed Natsunomeryu to return to the lake peacefully, where it slept once again.

Blue Flame Breath
Add a photo to this gallery 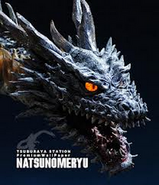 Natsunomeryu and Jumbo King in an Ultra Zone sketch

Add a photo to this gallery
Retrieved from "https://ultra.fandom.com/wiki/Natsunomeryu?oldid=496514"
Community content is available under CC-BY-SA unless otherwise noted.