Form B:
Nanashi (ナナシ, Nanashi , credited as 'Anonymous')[1] is a Kaiju that appears in SSSS.GRIDMAN. It is Akane Shinjo's final kaiju. This Kaiju really has no name, as 'nanashi' (名無し) translates to 'nameless'.

This was the first Kaiju to appear in over a week, being selected by Akane Shinjo among several incomplete figures after Alexis・Kerib pushed her into making a new kaiju. It was easily dealt with by Full Powered Gridman, who launched the Breast Spark at it. However, unlike other kaiju, its corpse did not explode.

Later, something else emerged from the "corpse" and began to wander around decapitating the Venoras, clearing the fog around the city. Full Powered Gridman was called into action once more, but was easily defeated by the creature because of its unpredictable and powerful attacks. The monster then began tearing the Assist Weapons off of Gridman and strangled him, until Anti arrived, knocking the monster aside. It then shot both of its opponents with a destruction ray, but Anti got in the way to protect Gridman. Battling alone, Anti evolved into Gridknight, and was able to match his enemy. Gridknight finished off the Kaiju by slicing it in half using his new cutting halo attack. Collapse

It, along with all the other Kaiju Gridman fought, reappeared when they were summoned by Alexis to get rid of Gridknight, since Akane refused to make any more new kaiju. It was finished off along with Gonglee when Gridknight sliced them in half using the Gridknight Circular. Decisive Battle

During the events of Gridknight Fight, Alexis・Kerib summoned Anti's monster form to fight against Gridknight. "Anti" was later on revealed to be Nanashi B's disguise that eventually wear off in the middle of their battle. 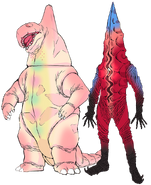 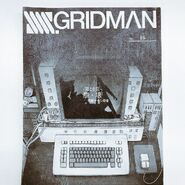