"You just had to know my name. I'm Alien Nackle, an assassin alien."

―Nagus introducing himself before he "killed" Juggler.

He first appeared in episode six of the series alongside his comrade, Alien Metron Tarude, where they discussed on a new plan to take over Earth with their boss, Don Nostra, while dealing with the planet's protector, Ultraman Orb, whereas Nagus proposed to just blow it up and get it over with. They were soon met by Jugglus Juggler who promises to deal with the Ultraman himself. Nagus was then seen playing a card game with Kaiju Cards with Jugglus and Tarude while they talked about the greediness of humans. He got mad at Juggler after his five king cards beat his four wind monster cards and tried to kill each other, but they called it off and called that act a joke.

Later on, Nagus' henchmen showed up and told them that the SSP, the captain of the VTL, Ittetsu Shibukawa, and a woman in white (who was hard to spot by Nagus) were spotted on their security cameras and so he told them to turn on the spatial distortion machine so that he can trap them in the forest and hunt them down no matter how hard the victims tried to run. Fortunately for them, the strange woman led them out of the forest, but Nagus and his henchmen caught up to them and easily trapped them. Ittetsu tried to use his knowhow in Judo and karate to defeat the alien but the latter defeated the former with three headbutts to the head. He and his henchmen then encountered Gai Kurenai and, unlike the VTL captain, gave the three of them a real challenge and they would have been goners when Jugglus showed up and summoned the Super Beast Aribunta to deal with Gai/Orb while they make their escape in their space ship. Afterwards, Nagus' boss, Nostra thanked him for using that Super Beast Kaiju Card to save him.

"Don Nostra, I'll say we use all these seven cards for Earth invasion. Let's make it flashy! I call it, Operation: All Monsters Attack..."

―Nagus before he was killed by Juggler.

While being disappointed that he not only received the prediction of death (made by Juggler with Enmargo as a Tarot Card), but also having to let his Black King card be used by Juggler, Nostra gave Nagus the order to kill the man while he fought Orb. Nagus happily obliged and does so, but failed to gain the Ultra Fusion Cards in Gai's possession after Black King was destroyed by Nagus. He still managed to gain Juggler's cards of King Demon Beast and suggested to Nostra that the Union would use them for an All Monster Attack but was quickly killed by a not dead Juggler, having survived the assassination via Bemstar's card, who stabbed Nagus with his katana in the back. 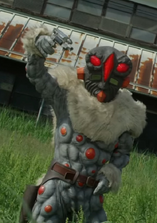 Saucer
Add a photo to this gallery

Retrieved from "https://ultra.fandom.com/wiki/Nagus?oldid=433134"
Community content is available under CC-BY-SA unless otherwise noted.