Ultra Q The Movie: Legend of the Stars

None
Nagira (, Nagira) is a space Kaiju that appeared as the secondary antagonist in the movie Ultra Q The Movie: Legend of the Stars.

Ultra Q The Movie: Legend of the Stars

In the Yayoi period, Wadatuzin first came to earth and Nagira was her gigantic minion. However, upon arriving she could not reawaken her space ship and had to remain on earth where she taught the humans to preserve their environment and was worshiped as a wrathful goddess for hundreds of years. However, in the present day, nearly a decade after Ultraman 80 had left Earth and monsters had seemingly stopped appearing, the humans were polluting the planet unintentionally and this forced Wadatuzin to take action. After failing with stopping them herself, at one point she used Nagira to destroy a construction site using nothing more than his tail. Nagira was called up once again as Wadatuzin was being chased by the police and a few other humans she slowly befriended. As the monster rose from the ground, Nagira used his heat ray to inflict wanton devastation around the area while setting the local police officers on fire before being told to go back underground. After a couple days, Nagira was summoned once again after Wadatuzin had collected enough followers for her to reawaken her space ship and used her monster to obliterate a nearby coastal town as a final testament to humans that they needed to protect their planet or far worse consequences would be in store for them. As her ship launched, Nagira was presumably taken with her to the far reaches of the cosmos. 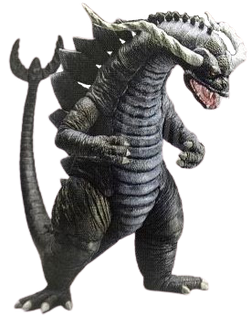 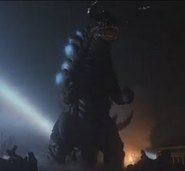 Nagira charging his horns with electricity

A figure of Nagira