None
The Mysterious Saucer fleet (謎の円盤群 Nazo no enban-gun) were a group of flying saucers that appeared in Ultraman Mebius as induced in Shingo Sakomizu's flashback.

Back during the time of the SSSP, Sakomizu was assigned to the Izanami, for test flights into FTL technology. During one of these flights he was attacked by a fleet of alien ships. All saucers were targeting him as Sakomizu ordered his friends on Inazami to hide underneath the shadow of Pluto. As several blasts were about to hit him, Zoffy appeared and rescue him. This incident made him realized how the Ultras were actually doing for humanity, that the human race was unaware of and his testimonies upon his return were the reason GUYS was formed and maintained despite a lack of supposed threats from aliens or monsters for twenty five years. 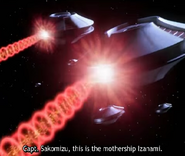