Defend the Earth from alien and monster threats

It is a subordinate organization of the International Defense Force and has branches in North America, South America, Europe, Africa, South Pacific, Silicon Valley, Migo Desert, and Japan (under the headquarters of Asia).

Mydo's base is situated in an auto shop. However, the shop is actually a hanger for the team's mecha. The ships are able to be transported via the billboard above the shop.

Sky Shark
Add a photo to this gallery 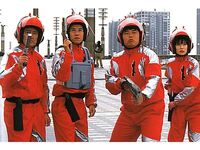 Add a photo to this gallery
Retrieved from "https://ultra.fandom.com/wiki/Mydo_(Mysterious_yonder_defense_organization)?oldid=525843"
Community content is available under CC-BY-SA unless otherwise noted.