None
Mushra (マシュラ Mashura), also known as Mashura[1] is a mushroom Kaiju who fought Ultraman Taro.

One day, Mushra appeared as a gigantic mushroom in the center of Tokyo and it began to rampage all over the nearest city. ZAT showed up in their attack vehicles to counter the threat with various types of drugs and weapons, but they failed to even weaken the mushroom monster. To make matters worse, it turned the drugs into a far more powerful poison and sprayed it throughout Tokyo City, infecting nearby trees, buildings, and event he planes. Kotaro transformed into Ultraman Taro and used his Taro Fire to burn the mushroom until there is nothing left but chunks. Satisfied, the Ultra flew away, unaware that a small mushroom fragment was left behind.

That mushroom fragment tricked a kid named Daisuke with a plant interphone to water it and tried convince him to eat itself. Afterwards and he finally did after some blackmailing from three unruly teenagers who crashed his home while the kid's parents were away. The result was giving the replacing the kid's head with a mushroom and placing him under Mushra's control disappearing into the night and dragged to nearby water sources and by the next day, more people's heads are replaced with mushrooms just like the kid because they drank the water which contained mushroom poison from the monster.

ZAT members: Nanbara and Kotaro deducted that Mushra was hiding at the water tower and a lot of infected people gathered around it. By the time, the team (with the Vice Captain and Kitjama shown up) got there, the water tower cracked and blew up, revealing the monster Mushra. He used his acid glob to turn all of the ZAT members but Kotaro into mushroom heads. After enduring attacks from the remaining members and destroying a few more buildings, Mushra commanded his slaves to follow him as he left the area to find the nearest water purification plant so he can poison the water and turn all of Tokyo into mushrooms.

With his efforts proven futile, Kotaro decided to turn into Ultraman Taro once again to fight the fungus monster. The two giants fought each other after an attempt from Taro's Bracelet Beam to cure the victims failed. Taro gained the upper hand by dodging the monster's acid glob and beating it up in close combat. When Mushra got the jump on the Ultra by leaping onto him, he finally got the upper hand at close combat, resulting in Taro's color timer turning red and beeping. After regaining his posture, Taro threw Mushra and fired his Bracelet Beam again, only this time, on the monster, resulting in losing all of the water in it's body and wither away due to the dry exposure from the technique. In the end, it was revealed that Daisuke was turned into Mushra the people who got turned into mushrooms heads returned back to normal and many mini mushrooms sprouted, and the ZAT members made delicious meals out of them. 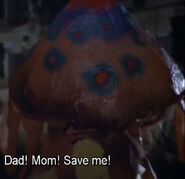 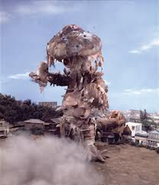 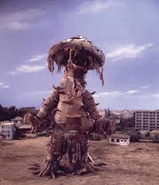 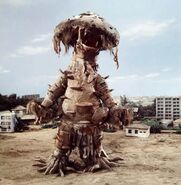 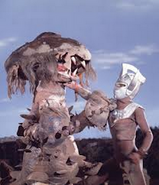 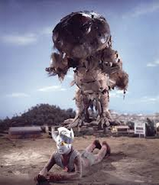 Figure of Mushra, by Bear Model. 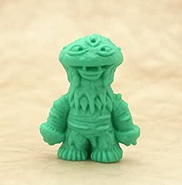