"The defense army, no, not just them, even everyone from Team EYES thinks of a militaristic way to win. Disputes between forces, the disputes are always going on and on and on. If there's some other way..."

―Musashi questioning the JADF army and Team EYES' way of ending the battle with an iron fist.

Musashi is known for his pacifistic personality as he never wants to solve things in an aggressive way. However, this also leads him to protest against Team EYES and the JADF when such aggressive actions are ordered. This also lead some Team EYES members to suspect him as Ultraman Cosmos due to his gentle and caring nature. During the final fight against Chaos Header, Musashi finally defeats the evil entity by purifying him, something which even Ultraman Cosmos never thought to do.

Musashi Haruno was a fifth grader who dreamed of becoming an astronaut in honoring his late father Hiroyasu Isohata (五十畑 浩康 Isohata Hiroyasu), who died in a rocket accident in 1993. One night he met Cosmos after his battle with Basical, and revived him using sunlight. Cosmos then left him a blue gem which gave Musashi the ability to summon the power of the hero.

During Basical's raid on the city, Musashi tried to summon the hero but he couldn't. He was forced to watch as the alien invader destroyed everything in his path.

Later on, after Basical was awoken by Shark's Jets, Musashi managed to summon the blue and silver gentle hero. Cosmos then fought Basical and both of them were evenly matched until Baltan morphed into his second form: "Neo Baltan." He was overwhelmed until he transformed into Corona Mode and gained the upper hand, managing to overpower the alien invader. The hero then used the Naybuster Beam and managed to knock the alien down. The alien realized what he had done as he just wanted to let his offspring to live on. It failed and he killed himself in grief. Just before he died, Cosmos turned back into Luna Mode and used the Luna Extract on the alien invader as his body was recovered by the Child Baltans. The military tried to kill Cosmos with their missiles, but was stopped by Musashi and his father. After finishing his battle against Basical, Cosmos left Musashi as the Earth was safe once again.

Musashi now 19 years old, joins a wing of SRC known as Team EYES. He goes to Kapuya island to see Lidorias . As he saw that Lidorias was infected by an evil energy that were revealed to be Chaos Organisms, he goes to chase Lidorias that appeared in the city and Cosmos returned once again, joining forces with Musashi. Musashi himself transformed into Ultraman Cosmos and fought with Chaos Lidorias and managed to calm her down using the Luna Extract. Both Musashi and Cosmos later would face countless memorable monsters such as Golmede, Spittle, Igomas, Chaos Bug, Mogrudon, Mienin, Gamoran and many more.

Much more tough opponents appeared when the Chaos Organism unleashed the Chaos Headers such as Iblis and Mebut to face him. Unable to face the Chaos Organism with Luna and Corona Modes, Cosmos with some help from Musashi and his friends, was able to awaken his third transformation: Eclipse Mode that achieved when Cosmos gained Courage and he used 3 of his forms to face more dangerous monsters.

Final Battle against the Chaos Header

After being separated from Cosmos, Musashi was rendered useless to fight Chaos Header. Even worse, Chaos Header appears and terrorizes as Chaos Darkness. Cosmos appeared and fights the dark monster but Musashi orders Cosmos to stop, feeling that Chaos Header has their inner goodness somewhere in their heart but no avail as the giant paid no attention to Musashi. As Cosmos was on the brink of defeat, Musashi fuses with him again and thus with the help of Lidorias, Bolgils, and Mogrudon, Chaos Header finally purified, turning him into an angel and leaves. Cosmos thanked Musashi for defeating Chaos Header in a harmless way and leaves.

Few years after Sandros was defeated. Musashi met Fubuki that he is ready to pilot and travel to Planet Juran with some of the monsters on Monster Island to Juran. Suddenly, Gloker Pawn appear and attacks the base and aims to destroy the space capsule that will contain the monsters. Cosmos arrives at that time to stop the duo but ended up being defeated. Musashi used the Cosmo Stone and merged with Cosmos and once again reached Eclipse Mode and paralyzes the two. But, Ultraman Justice appeared and revived the two Gloker and stopped Cosmos from making any movement. At the end, Musashi sacrificed his life with his Color Timer being hit so hard and died making Fubuki swear vengeance on Justice for a while.

After being revived by the combined effort of Ayano, his mother, Captain Hiura, Mizuki, Doigaki, Ikema, Mini, Child Baltan, Mari, Shau and Jin with faith and hope that revive Musashi and Cosmos and a new, Future Mode, was born. He arrived and transferred half of his energy to Justice and together destroyed Gloker Bishop.

Cosmos and Justice went to space and tried to stop Giga Endra with Cross Perfection but failed. Justice then became a shield to Cosmos and tried to destroy Giga Endra but the two were exhausted and ended up being swallowed to by Giga Endra's final attack. But, they still not give up and the two fuse to become Ultraman Legend and destroyed Giga Endra with the Spark Legend from inside and the two split. While Julie remained on Earth and replaced Musashi as its protector, Musashi and Cosmos travel to Juran and create the new habitat there.

He returns in the movie, Ultraman Saga, along with Asuka and Taiga. It is revealed that he's married with Ayano Morimoto, with whom he had a 10-year-old son named Sora Haruno.

In his universe, Musashi had traveled to Planet Juran, where he, Cosmos and Chaos Header 0 acted as its defenders. He received a message from an unknown person. Musashi arrived in time to reach another universe's version of Earth to save Taiga and Takeru from Gubila's attack. Then, Musashi and Taiga ended up being recruited by Team U to fight against Alien Bat and Hyper Zetton (Gigant).

On the next day, Gubila and Gomess appear to attack them and Musashi transformed into Ultraman Cosmos and gained the upper hand until Gubila and Gomess going berserk and Ultraman Zero comes to aid him (even though due to Taiga's stubbornness, he can't grow into full size) and use Full Moon Rect to calm the duo kaiju. After then, Alien Bat came and destroyed them because of their failure and warned Cosmos to not intervene with his plans.

Musashi question Team U about another Ultra before him but they not answer him. Then, Taiga realized that Ultraman Dyna actually came to their Earth before them and ask where he is. Before sleep, Musashi tells the children about Juran, and the kids enjoyed hearing about the planet. In the morning, alien attacked their base and showing that Dyna is now in a deceased state after being defeated by Hyper Zetton (Gigant) not long ago. Hyper Zetton (Gigant) sent fireballs and Musashi transforms into Ultraman Cosmos and protects them with all that he got.

After Dyna was revived, he restored Ultraman Cosmos and the trio successfully destroyed Hyper Zetton (Gigant). However, a more dangerous foe appeared after Alien Bat's spaceship combined with Hyper Zetton (Gigant) and transformed into Imago Hyper Zetton and bested them with ease. Cosmos and Dyna managed to revert to their hosts but Zero died because of his injuries. Musashi and Asuka then told Taiga to never give up and trust in their faith and a miracle beyond what they can achieve would happen. Their bond revived their light and transformed them together into a new fusion Ultra, Ultraman Saga and destroyed Hyper Zetton with the Saga Maximum with help from Team U.

Musashi as Cosmos then returned to his world and reunited with his family and lived happily there.

In the beginning, Musashi as Cosmos in Corona Mode battled Etelgar on Planet Juran. When Cosmos attempted to defeat Etelgar, the wicked monster used a golden aura to force him into Luna Mode and seal him. Cosmos managed to separate from Musashi before being fully sealed by Arena. Musashi joined forces with UPG along with Hikaru and Shou to save the Ultra and defeat Arena and Etelgar. He reunited with Ultraman Zero, However, Etelgar was defeated and forced to retreat and then Zero and Musashi have a chance to train them. He then fought Arena and destroyed the domain that sealed the Ultra and merged again with Cosmos. He, along with the other Heisei Ultra give Hikaru the power of the Heisei Ultras into the Ultra Fusion Brace. Hikaru and Shou transformed together to became Ultraman Ginga Victory and destroyed Dark Lugiel. He and Ginga Victory left the other six Ultra to fight their old enemies that were made by Etelgar and together faced Etelgar themselves. Cosmos transformed into Eclipse Mode and had his rematch against Etelgar. He then with Ginga Victory managed to defeat Etelgar once and for all and restored Alena to her old self.

Musashi returns in the miniseries as he was first introduced while he was in Planet Juran, checking up on Bolgils. As he was doing that, Shin Asuka then called him for help as Musashi accepts before transforming into Cosmos as he goes to where Asuka was.

The alternate counterpart of Musashi Haruno is a ZAP SPACY operator who didn't join the Pendragon crew but instead works at the base. Mega Monster Battle: Ultra Galaxy Legends The Movie

Cosmo Pluck (コスモプラック Kosumosu Puraku): Musashi holds the Pluck then holds both his hands to his chest in a formation as if he's holding on to a sphere, Cosmos' energy then forms in Musashi's hands then flashes away, Musashi then immediately raises the Cosmo Pluck to the air and shouts "Cosmos!". Cosmos' then emerges in his default form, the blue Luna Mode. 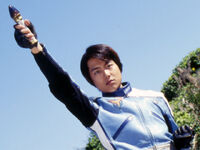 Cosmo Stone
Add a photo to this gallery

Released as the first and only human-based addition for the Ultra Hero & Monster Series lineup, Musashi is a 6-inch figure that is molded in skin-colored soft vinyl plastic, and features a high amount of paint operations on his attire & helmet. He also comes with a Cosmos Pluck & a Rounder Shot accessory to wield with.

Not counting the Bullmark toys, Musashi Haruno is the first & only human character to be released as a soft vinyl figure by Bandai.

A 13-year-old Musashi in Young Musashi Chapter.
Add a photo to this gallery 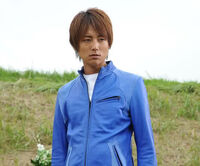 Musashi with Hikaru Raido
Add a photo to this gallery

Alternate Musashi as a ZAP Spacy member, with his Cosmo Pluck raised.
Add a photo to this gallery

Retrieved from "https://ultra.fandom.com/wiki/Musashi_Haruno?oldid=527701"
Community content is available under CC-BY-SA unless otherwise noted.