Ultraman Taro episode 24 "This Is the Land of Ultra!"

When an Earth rocket was launched into space and destroyed an asteroid, it had a terrible consequence, freeing the horrible space monster Mururoa, a creature of such terrible power that his arrival could spell the end of the Planet Earth. Mururoa soon descended to Earth and with the Space Moths assaulted a passenger plane, Mururoa taking sadistic pleasure in destroying it with his acidic spray. Mururoa and his swarm soon attacked a industrial area with his acid spray, melting everything in sight with the spray. The sun soon rose, driving him into a rampage as his moths left. ZAT soon attacked the space kaiju, but his acid down them in seconds. Kotaro had only one option, summon Ultraman Taro, first to save one of the ZAT members' falling planes but Mururoa attacked the hero, proving resistant to most of Taro's blows but was gradually beginning to be overpowered. Realizing his advantage was lost, he unleashed his black spoke and acid mist, blinding and badly wounding the hero. He pressed his advantage, pummeling the hero severely and throwing him around like a rag doll. Taro was slammed to the ground and wounded so badly he had to retreat. Unopposed, Mururoa released his smoke, blocking out the sun over the entire world in seconds. It was the middle of the day, and yet black as night, it could very well be the end of the world. But the Mother of Ultra had a plan, soon summoning Ultraman Taro back to the Land of Light to retrieve the only item which could clear the space monsters smoke, the Ultra Bell. As ZAT fought his Space Moths, Mururoa appeared himself to fight back as the moths blinded their fighters and made their fighting difficult. Mururoa soon unleashed his acid on the surrounding area, melting buildings to nothing before retreating into the smoke. With Ultraman Taro nowhere to be found and their own weapons powerless before the space monster, it appeared Earth was doomed. Soon Mururoa attacked once more, but as ZAT attacked the doomsday kaiju, a member of their own landing on his head and planting a device on him. But before an attack could be made, Ultraman Taro and the Ultra Brothers arrived, pulling the Ultra Bell with them. The legendary device's tolling cleared away Mururoa's darkness in an instant. Taro then arrived himself, launching a viscous assault on the terrible creature and pummeling him with blows and throws. He finally tossed the space monster high into the air were the bomb planted by ZAT exploded, destroying Mururoa for good and allowing the Ultra Bell to be returned to the Land of Light. 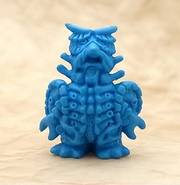 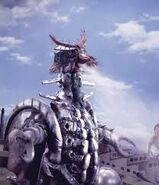 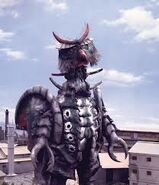 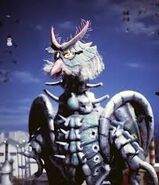 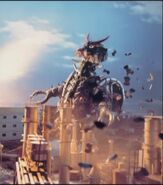