"Stop being selfish, you guys were the one who lured this monster!"

―Hideki Go, The Monster User and the Boy.

Return of Ultraman episode 33 "The Monster User and the Boy"

The "Zoa" in Zoa Muruchi's name means "Hate" in the Alien Mate's language, hence Bio's hatred against Earth for his father's death.

Muruchi's head design is based on a salmon. Muruchi features some elements of his design in common with male salmonids (fish in the salmon family, including salmon, trout, grayling and char), such as his long jaw and hooked kype.

The first Muruchi was originally seen chasing after Ryo Sakuma at the beginning of the episode, until encountered and sealed underground by an Alien Mates, who would later adopt the boy. However, Alien Mates was tragically shot and killed by a police officer in an angry mob (who were trying to kill the boy too,) Muruchi arose from underground and caused havoc. Believing that those people who were responsible for the innocent alien's murder, Go initially refused to transform into Ultraman Jack and let the villagers reap for their sins, but he eventually did under the persuasion of Captain Ibuki. He and Muruchi fought in a local refinery plant until he destroyed Muruchi with a single use of the Spacium Beam. The Monster User and the Boy

Muruchi reappeared in Ultraman Ace, episodes 7 and 8 "Kaiju vs. Terrible-Monster vs. Alien" and "Life of the Sun, Life of Ace", as Muruchi Ⅱ (ムルチ二代目 Muruchi Nisei).

A second Muruchi appeared in the middle of a battle between Ultraman Ace, Doragory, and Alien Metron Jr., joining the fray and attacked Ace along with the Terrible-Monster and his master. Despite intending to help the others, Muruchi II's appearance was short-lived. Muruchi II picked up Ace and threw him to the ground, but then tripped and accidentally rammed into Doragory. Doragory angrily attacked Muruchi II, viciously killing the monster by tearing off his lower jaw and his left leg.

Zoa Muruchi (ゾアムルチ Zoa Muruchi) was originally a normal Muruchi being enhanced through biological remodeling when Bio sneaked into Earth in the early years when defense forces was very weak.

Zoa Muruchi was created by Bio, the son of the original Alien Mates (from Return of Ultraman), but this time as a means of vengeance against the humans for killing his father. And then Bio unleashed Zoa Muruchi to destroy the nearby city. While Zoa Muruchi and Ultraman Mebius fought, Bio met a woman, a principal of a kindergarten, who tells him that she knew the boy whom the elder Bio's father had adopted. After learning of a tragic story about his adopted brother's efforts to find the his father's UFO, Bio found reason to forgive the humans, however he had created Zoa Mururchi as the embodiment of his hatred towards the humans. Overcome with grief, but wanted to believe in human kindness again, Bio then called out to Mebius to end his hatred by destroying Zoa Muruchi. Mebius used the Mebium Shoot, and destroyed Zoa Muruchi, after it let out one last anguish-filled cry, ending the suffering the human disguised Mates had gone through. The Monster Master's Legacy

Confronting the ZAP SPACY underwater (after King Joe Black shot the Pendragon down into the ocean) Zoa Muruchi was attracted by a sonar frequency that the ZAP SPACY had created to scare away a group of Arigeras. Threatened by the imposing monster, Rei sent out Eleking to battle it, as Gomora was not as adept at fighting underwater. The battle went back and forth, but eventually, Eleking's electric attacks proved too strong, and Zoa Muruchi was destroyed by his electric tail shock.

Zoa Muruchi reappeared in the movie Mega Monster Battle: Ultra Galaxy Legends The Movie as one of Ultraman Belial's 100 Monster Army. He was first seen as a spirit in a shot of the Monster Graveyard along with Hoe, King Pandon, Fire Golza, and Froguros. He then teamed up with Telesdon, Arstron, Alien Hipporit, and Alien Temperor to fight Gomora and was later killed by Ultraman Mebius' Mebium Shoot.

He makes an apperance in New Ultraman Retsuden episode 8 as Muruchi II. His appearence is referenced by Alien Valky as he explains Doragory's battle in Ultraman Ace.

Muruchi, as Zoa Muruchi, appears as a Spark Doll. He and several monsters cheer on Ultraman Ginga as he fights Dark Galberos. The Closed World

After Ultraman Ginga defeated Dark Lugiel, it is most likely that Zoa Muruchi returned to Alien Mates' planet. Your Future

Zoa Muruchi returned in the second movie special. He was the second monster to be Ultlived by the Livepad and the first one by Hikaru Raido. He went up against Doragory but he knocked him down immediately. After he got back up, he along with Zetton were defeated by one slash of Zamsher's katana. Ultraman Ginga Theater Special: Ultra Monster ☆ Hero Battle Royale!

Zoa Muruchi appeared in episode twelve of Ultraman Ginga S, where he was Monslived by Alien Guts Vorst to attack Chigusa Kuno and Alien Metron Jace. Metron grew to the monster's size but before he can strike, Muruchi fired his Energy Beam at him and he was struck down. Ultraman Victory and Ultraman Ginga appeared to assist him but they could only accomplish so much. They only distracted and held off but Muruchi only wanted to put the hurt on Metron Jace. When the alien started dancing with his lighters, thanks to Chigusa's singing, Muruchi became distracted by the alien's singing and dancing and, as a result, got blown up by a combination of Victory's Victorium Shoot and Ginga Strium's Ultra Shot.

"A trump card needs to be saved for the last, Ares. Now throw down your weapons. That kid's life depends on you."

As recalled in Ultraman Taiga's past, a modified variant called Re-Muruchi (改造ムルチ Kaizō Muruchi) was one of the members of Gua Army's Mechanized Monster Army under Imbiza's leadership. While Imbiza launched his army against Andro Ares on Planet Maijii, Re-Muruchi was kept hidden under the sea to capture Taiga and used the young Ultra as a leverage to force Ares into surrendering himself. Outraged by Imbiza's use of dirty tactic, Taiga mustered all of his strength to escape and toss his captor in mid-air before punching through the monster's gut, giving Ares the opportunity to deliver his counterattack on the Battle Captain himself. For Whom Is That Fist For - Part 2

In the non-canon manga Kagayake Ultra no Hoshi, a Muruchi was one of the many monsters under Giant Yapool's command to fight against Ace in Shikoku, Japan.

The first known figure of Muruchi was created by Popy in 1978 as part of the "King Zaurus" toyline. It has about four to five rotating parts, and its design is relatively show-accurate. However, being an older figure, its paint job isn't incredibly accurate to the costume seen in the show, painted with mostly red as well as some yellow and green around the body. The figure stands at approximately 6-7 inches in height.

A figure of Muruchi II was created by Marmit in 2010. It's estimated to have six rotating parts and it is highly show-accurate when compared to the original. The figure is approximately 9 inches in height.

In more recent years, a figure of Zoa Muruchi was released as part of the Ultra Monster 500 series. The figure has three rotating parts and has a somewhat show-accurate paint job, however, its appearance lacks certain details that are noticeable in the show. The figure is # 38 in the series and stands at 5 inches in height. 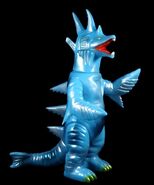 Figure of Muruchi, by Marmit. 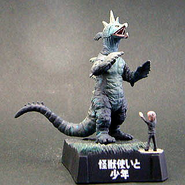 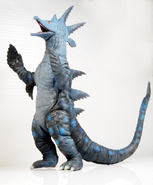 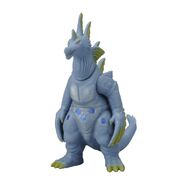 Figure of Muruchi, created by Popy. 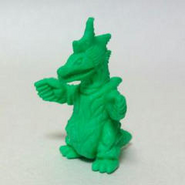