Dinosaur Great War Izenborg episode 12 "It is Raw! Deadly! Life to bet on a Torrent"

None
Murara (ムララ Murara) was the first Triceratops to appear in the 1977 series, Dinosaur Great War Izenborg, appearing in episode 12.

Bursting from a mountain side, Ururu's latest soldier marched his way towards a peaceful village, killing two wood cutters in the process. With the D Force alerted, Murara's attack on the village continued unsupervised. However, when a mother and child where spotted by the triceratops, something in the beast's mind clicked. His eyes full of hatred became soothing and the beast retreated just as the D Force showed up.

Now labled a traitor by Ururu, Murara had to answer to his once comrade, Gororo the pachychephalosaurus! The two beast clashed, horn against hard bone skull, in a fight to the death! Sadly though, much like Unko before him, Murara was tossed aside and killed with a savage bite to the jugular, leaving the D Force to fight Gororo. 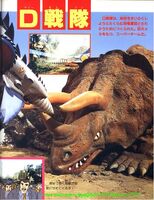 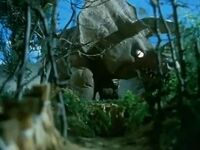 Add a photo to this gallery
Retrieved from "https://ultra.fandom.com/wiki/Murara?oldid=535786"
Community content is available under CC-BY-SA unless otherwise noted.